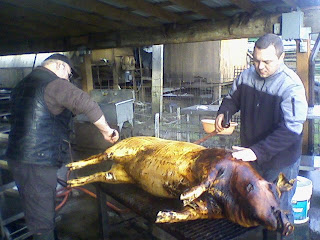 I made a trip to Alm Ranch in Fall City today, to see some Transylvanians do a pig their way.

In Hungary, parts of Ukraine and the Balkans, they burn the hairs off the pig, instead of using water. The method is:

I've never seen this done by experts who do it this way, so it was neat to watch.

If you look at the photo above, it could be pretty much anywhere in the world. There's something about the clothing and body language of the Transylvanians that doesn't look typically American.

Alm Ranch is an interesting operation. People show up, buy animals, and kill them. The farm provides facilities for slaughtering the animals. Alm Ranch is licensed and regulated by WSDA, although many operations like it exist that are not licensed.

Most of the customers are Asians or other recent immigrants. Killing and processing a pig is a social occasion. A lot of "normal" Americans have a hard time wrapping their heads around the phenomenon.

Based on who I saw at the place, I got the feeling that a lot of "normal" Puget Sound people have no idea this sort of thing goes on in their backyard.

Besides pigs, Alm Ranch has calves, cows, chickens, ducks and even a herd of water buffalo. I'd never seen water buffalo before, so it was a treat. The meat of water buffalo is said to be really special. I asked the owner if any restaurants were using the water buffalo. He said no - it was all just families buying their own meat.


Back to the Pig

Traditionally, people drink hard spirits to toast the soul of the pig. The Transylvanians had brought with them some slivovica, which they shared with me. I haven't had slivovica that good since I was in Austria. It was not surprising - the slivovica was imported from Croatia (former Austro-Hungarian empire).

It felt a bit odd to drink so early, but that's exactly what you do when you kill pigs this way, so I enjoyed it.

Overall, it was nice to get a break from work, which invovles pigs, pork and meat processing, in the abstract sense -- and do something more "real".
Posted by Heath Putnam at 12:31 PM

Hello Heath-After talking with you yesterday at the University Farmer's market, I googled Alm Ranch and stumbled upon your blog which I had not seen before. Interesting story-makes me curious to taste water buffalo! Best. MAX Moehs