The Millennium of Hungary and Its People, My Wonderful Customers 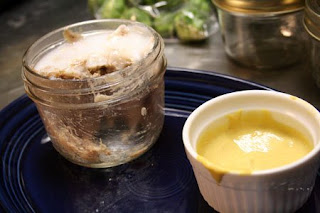 Larry's Mangalitsa Rillettes with Mustard
I got asked the question, "are mangalitsa pigs curly-haired?" today.

Trying to find an answer, I came upon the book "The Millennium of Hungary and Its People" from 1897 which discusses the creation of the mangalitsa pig: Things have changed tremendously in 170 years: Serbia isn't part of Hungary, pigs don't get driven by swineherds to slaughter - and most importantly, the Mangalitsa is finally available in the Western Hemisphere. 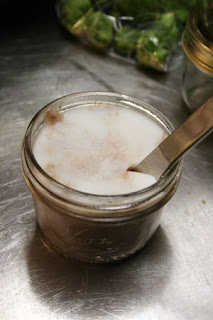 I had a customer bring me some Mangalitsa rillettes today at the market. These were incredibly good. The lard with mushrooms, being a lardier product, took a few days for me to eat. The rillettes were 90% gone by the time the market was over.

I've had rillettes before, made from normal pigs. Typically, the fat is a bit repulsive and the meat doesn't taste meaty enough. When I'm done, I often regret eating the stuff. With Mangalitsa, the regret is usually that it is all gone. 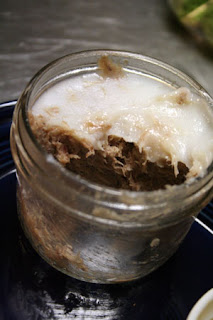 I'm very grateful for such customers. It isn't so much that I'm getting free stuff, but rather, I'm happy to see these people making such tasty things and having a good time doing it.
Posted by Heath Putnam at 7:29 PM