The Herbfarm Becomes "The Herb and Pig Farm" 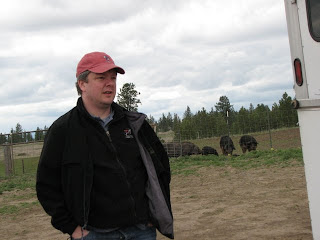 The Herbfarm's Keith Luce visiting our farm.
Mangalitsa pigs in background looking on.
The Herbfarm has been one of our best customers since we started selling pigs.

With the arrival of the new Executive Chef Keith Luce, they started using whole pigs. That's great for small farmers like us, because we can't easily sell pork in smaller portions - the complexities of distributing pork and processing the unsold parts (and selling them later) would be too great.

Keith Luce has a lot of goodwill with us. One night, due to miscommunication with another chef, we had an extra Mangalitsa carcass. Chef Luce bought it from us, paying full price. Given that a Mangalitsa carcass is an expensive perishable, that really helped us out of a bad situation!

Chef Luce has also given us feedback that we've pased on to our slaughterhouse, helping to improve the quality of all the meat that we sell. Very few customers take their meat so seriously.

Their approach already so hands-on, I suggested to them, back in January, that they should buy their own Mangalitsa pigs, fatten them and slaughter them. I figured that they'd get a number of advantages:
Part of the deal was that we help them come up with a feeding program that will produce pork of the highest quality. If someone buys our pigs, we want them to make the most of them, so we teach them what we learned in Europe. 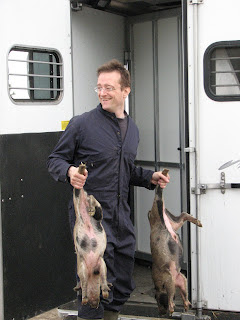 Heath Putnam with two Mangalitsa-Berkshire crosses, loading them into the Herbfarm's trailer.

It took them several months to get ready to keep pigs, but it finally worked out. So last Monday (May 12), Chef Luce and 3 Herbfarm employees made the long trek out to our farm in eastern WA to pick up their pigs. We sold them 5 Mangalitsa and 2 Mangalitsa-Berkshire crosses. 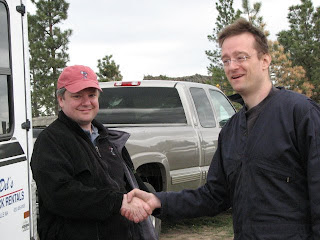 Keith Luce shaking my hand after loading the pigs.
Loading the pigs was uneventful. We backed our trailer up to theirs and moved the big pigs from one to the other. I carried the two piglets myself to their section in the trailer. 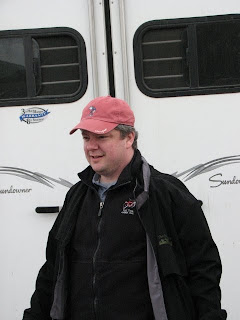 Trailer loaded and ready to go, Chef Luce looks happy to own some pigs.
We visited their farm a few days later. One of the pigs had already been moved to a different farm, the Willows Inn in Bellevue, but we could see all the other pigs and their new home. They looked settled in, and already very spoiled.

My wife and I were both struck at how much the farm looked like the small ones we saw in Austria. Woodinville is a very beautiful place. 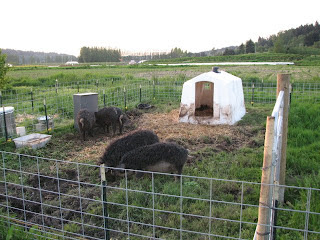 They ignored our bread that we brought for them. We found out their feeder was full of very high-protein feed, so they weren't looking for a handout. Chef Luce told us that, somewhat ridiculously, the pigs are eating organic feed.

We were very impressed with their little pigpen, which looked as new as can be. We laughed at how they'd already muddied up their hut and dug up a bunch of the grass.

Of course, if the pigs ever decide to bust out of their pen, it won't keep them. They can leap over it if they want, they've got all day to short out the hotwire by shoving something against it, and once they get big enough, they can just bust through by pushing on it hard enough.

The only thing that's going to keep those pigs in that pen is a feeder full of tasty food.

The pigs looked at home:


They'd already done quite a bit of rooting, which you can see in this next photo. Their yard will be all dirt in a few days. The damage they do to a pasture is astounding. 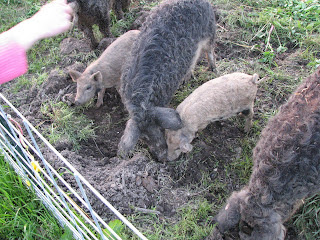 We threw in some food to lure some over:


We thought the piglets were particularly cute. 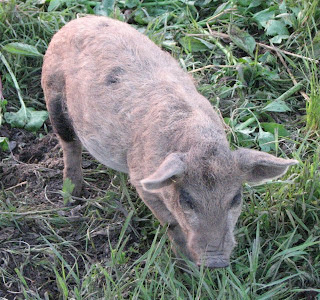 Mangalitsa-Berkshire piglet
My wife tried to be nice to them. They were wary though, like most piglets: 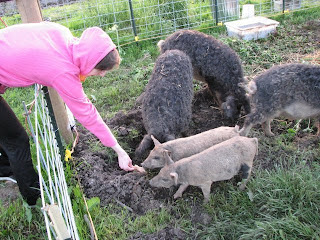 My wife tried to interest a Mangalitsa in a flower. 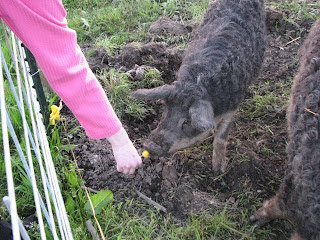 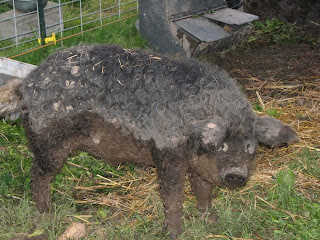 Knowing the story of these pigs, it was just amazing to see them in Woodinville at The Herbfarm. The Mangalitsa pigs were conceived in Austria, born in the USDA's quarantine center in NY, trucked to eastern WA and finally brought, by Keith Luce to The Herbfarm.

They'll live for quite a while at the Herbfarm. When their time comes, they'll get processed by Keith Luce and his staff into things like cured products.

Seeing the pigs in their new home, knowing that they'll be getting treated so lovingly and processed with so much care by Keith Luce and his staff really made our day.
Posted by Heath Putnam at 10:23 AM

Last Sunday evening AT and I visited with the very first (living) mangalitsa pigs in Western Washington.

We shared a snack with them which consisted of several handfuls of baby carrots. Even though their pen was stocked with huge piles of fat turnips and greens and a feeder with all the high protein chow they could eat, they still went after the carrots as though they were starving.

AT and I are poorly practiced in the art of trespassing, our interloping was quickly addressed by Bill, the Herb Farms Head Gardener.

As it turned out Bill was quite gracious with us after he determined that we had no harmful intentions. Bill is in charge of the husbandry of the mangalista, under the directions of Chef Luce.

Bill and AT chatted away about all things swine while I snapped quite a few pictures and took some videos. One of my favorite stills of the evening can be viewed here: http://home.avvanta.com/~boa/mangalitsa-snout.jpg

The pigs were playful and active and quite literally seemed to be in hog heaven. There are other fenced areas immediately adjacent to their current dwellings and after they have thoroughly trashed their current surroundings, they will be rotated into another pristine enclosure.

There is a small garden with a pigpen that is maintained by the Herb Farm. In the past they have gone through a couple of potbellied pigs. These past pigs have served as mascot pets and not as a harvestable commodity. They have been short-lived as they have gorged themselves to death on all the leftovers offered to them by the Herb Farms patrons. (What a way to go)! Potbellied pigs are prone to obesity if given the chance.

I sincerely hope that the solo pig is not only the current mascot of the Herb Farm but that it will be sacrificed for harvest and offered on the menu at some point. I recently got to try Iberico ham that had been finished on acorns. It was a meat epiphany! I can only imagine mangalitsa fattened on scraps from the Herb Farm.

That's a wonderful photo you've got there! He looks so sweet! I guess I'd kill him last. There's one pug-faced pig in their bunch whos' fairly skittish and unlikable. I'd do him first.

They really did move the solo pig to Willows Inn, in Bellevue, and not to the Willows Lodge, just across from The Herbfarm. Mr. Zimmerman is friends with the folks at the Willows Inn. I'm thinking I want to get out to visit that pig too, to see how he's doing.

I have my doubts about their rotation plans. I think they need more space for that to work. If you look at the photo I posted today, the pigs are making quick work of the grass.

I just talked with Kylan Hoover the other day. He's got 4 of his 10 acorn-finished Mangalitsa for Fall already sold. I'm thinking that I need to buy some of his meat, just to try it As expensive as our stuff will be, his stuff is going to cost at least double.