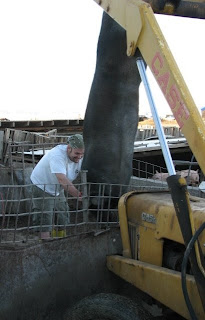 The purpose was to allow chefs to learn how to slaughter - with as much or as little help as they wanted. The slaughterer was there to supervise people as they killed and eviscerated their own hogs. If they didn't want to do it, he'd take over.

Killing hogs is stressful because mistakes can ruin some or all of the meat. Given that, a lot of people throw up their hands and let the slaughterer do it. The goal of yesterday's event was to create a positive learning environment.

With the Culinary Communion folks, there are practical reasons for them to learn how to slaughter - they already do all the processing, so they might as well kill their hogs too. Given their high-standards, they are better off doing it themselves and not being dependent on a slaughterer. 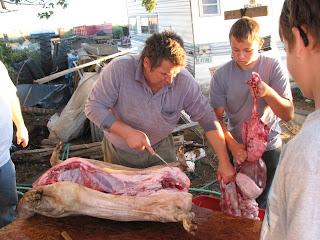 Vassily and his son Vitaly showing how to eviscerate.
Vassily was the instructor/slaughterer. He's got about 30 years of hog-killing and processing experience. For the last decade, he's killed about 2 hogs a week. He's comfortable doing things different ways (e.g. scalding versus burning). He's also people-person: authoritative, calm and relaxed. Where he comes from, they make traditional products, so he seemed a good fit for the chefs.

August is a bad time to kill hogs, so we started in the evening, when it is cooler and there's less flies. Unfortunately, things went too slowly and we ran out of natural light. We used electric lamps, but it really slowed us down.

The original plan was to have Vassily do two small hogs so that the visitors could watch those, perhaps help and then do their own (or have Vassily do them). That was a mistake - by the time Vassily was getting done with first two, it was getting dark, and the Culinary Communion team still had to kill and process a 730-lb hog. Lesson learned: do the critical hogs first.

In the end, we killed four hogs. Vassily showed how to eviscerate one hog. Erik Wood eviscerated (with Vassily looking on) the second hog. Gabriel Claycamp and his team stunned, stuck and eviscerated their hog, then broke it down, vacuum-packed it and hauled it away. Vassily advised them when they needed help. I killed a fourth hog, and Vassily showed me a bit about how to eviscerate it. One interesting thing I learned: with the small hogs, scalding (even if all you do is ladle water over it) is the way to go. Except for the feet, where the hairs will probably stick and need burning. 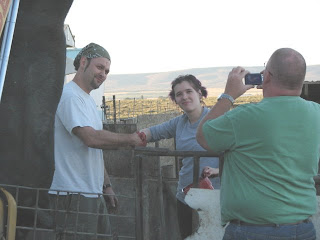 The hog-killing was a very social event. Here you can see Tom Black photographing Gabriel and his assistant (Natalie) after they've collected the blood from their hog. The hog slaughter event isn't just about turning animals into meat, but about people having fun and doing something important together.
Posted by Heath Putnam at 9:53 PM 2 comments 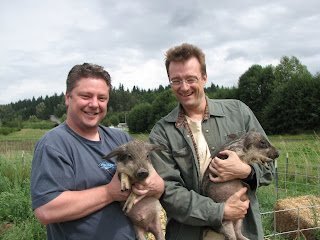 The Herbfarm's Executive Chef Keith Luce with Wooly Pigs' Heath Putnam.
My wife and I delivered the Herbfarm their piglets today. The piglets came out of the kennel and into their pen:

Bill Vingelen, the Herbfarm's head gardener and herdsman, was happy to see the new guys. 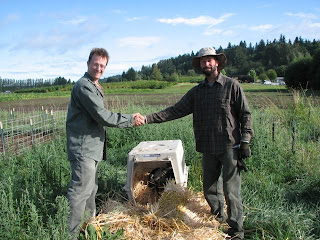 Wooly Pigs' Heath Putnam and The Herbfarm's Bill Vingelen
shake with new Mangalitsa piglets between them.

Later the piglets went over to the edge of the fence. The Herbfarm's bigger pigs, who have grown gorgeously fat, ran over to inspect the newcomers:

The older pigs were fascinated by the little ones. They made a lot of noise, sniffed them and tried to reach them: 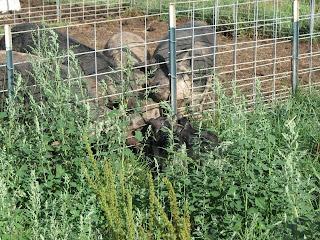 The Herbfarm's Fat Hogs Study the New Arrivals
We later put one of the piglets into the big pen. The hogs chased it and aggressively nosed it, flipping it around. Eventually we put it back in the neighboring pen, so that the piglets could grow unharassed. Mixing pigs with such a disparity in sizes is a bad idea, because the older hogs could easily crush or maim the younger ones.
Posted by Heath Putnam at 5:04 PM 1 comments

More Mangalitsa on the Way

Patricia of Cook Local has a post about our Mangalitsa pork.

For the last few months, we've been out of most of our Mangalitsa, so we only had ground pork for Patricia. Thankfully she could see what's so special about Mangalitsa from the ground pork - proving once again the rule that pretty much every scrap of Mangalitsa is special.

I'm happy to announce that we'll be killing more Mangalitsa pigs soon, so we'll have Mangalitsa for sale.

Anyone who wants to be able to buy some at the farmers market should send me an email by clicking here, so that I can notify you after we get the product into cold storage. If there's some specific cut you want (e.g. jowls), now is the time to notify me, so we can set it aside. Most cuts will cost $30/lb.

We'll also have pork from our Mangalitsa-Berkshire crosses.
Posted by Heath Putnam at 9:40 PM 3 comments

Pigs in the City 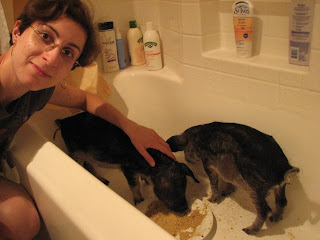 Zuzana Putnam with the Herbfarm's newest pigs.
The Herbfarm just bought some more pigs, as did Red Mountain Mangalitsa.

Although the Herbfarm didn't buy as many pigs as Red Mountain Mangalitsa, They are staying a while in my urban apartment, which makes things very interesting. They are staying at my place because having picked up the pigs from the farm in Eastern Washington, I couldn't deliver them to the Herbfarm's farm directly - as they just aren't ready. But soon enough the pigs will be in Woodinville, joining the Herbfarm's other pigs that they bought from us.

Not having a farm to put them near Woodinville, I figured I'd just keep them in my apartment's bathtub for a day. If nothing else, it would be fun.

I called my wife before I brought home the pigs, so she'd know what to expect. She seemed horrified at first. We don't have any pets. When I got home, she was actually eager to see the piggies, and she enjoyed watching them in the bathroom.

The pigs came out of a pen with other pigs of the same age. Although they only had a few clumps of feces on them, they absolutely reeked. As soon as we got them out of the kennel, I bathed them and washed out the kennel. Then I killed the 30 or so flies that had hitched a ride in the dog kennel I used to transport them.

This experience reminded me of how whenever the topic of pigs comes up, some ignorant person mentions that "actually pigs are very clean." My friend and I joke, "yes, they are clean. It is just the shit and piss all over them that gives people the wrong idea."

In order to allow the pigs to eat and drink freely, I brought feed and water from the farm. Strange water that smells different than what they are used to can make them balk at drinking.

The pigs ate a bit:

Then the pigs slept:

Wednesday morning, the piggies should be in Woodinville, living the good life. Many months from now, people will pay a fortune to eat the flesh of these cute piggies.
Posted by Heath Putnam at 12:28 AM 1 comments

Feeding time for pigs is always entertaining. They sniff to see what's coming and get very agitated. I've seen a crowd of people waiting for something act the same.

These Mangalitsa were filmed on a farm in Austria.

Posted by Heath Putnam at 3:51 AM 1 comments 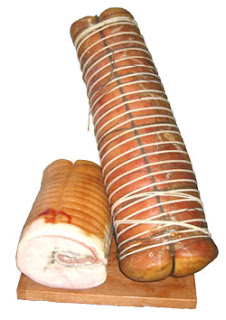 Mangalitsa Pancetta
I came across an Italian producer who uses Mangalitsa to make what I consider to be real traditional products. The picture of it is shown above. If I was to eat pancetta, that's the pancetta I want to eat.

Pancetta is made from the pig's belly. As Mangalitsa belly is almost entirely fat, the Mangalitsa pancetta is essentially a solid block of fat. Anyone who has seen typical pancetta made from modern meat-type hog bellies will notice the difference in lean percentage: 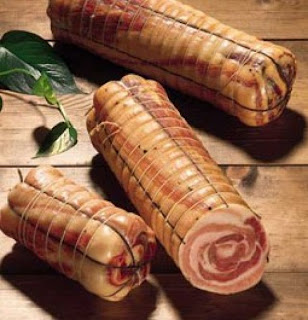 At one point, pretty much all pancetta looked like the Mangalitsa product - as the common hogs were so much lardier than today's. Of course, the cured products from lard-type animals taste a lot better - and they cost about 7 times as much per pound as the ubiquitous meat-type product.

When one considers that today's readily available "artisanal" products taste so flavorless and unsatisfying compared to what our ancestors ate, I think it is better that people don't know what they are missing out on. If your only coffee is Folgers, better that you don't know it is just a pale shadow of the real thing.

This issue - Mangalitsa bacon versus normal bacon - has particular relevance to me right now. In a month or so when it turns cold we'll kill our Fall Mangalitsa. These are the first Mangalitsa I'd even think of curing and turning into things like bacon - as they are finally over 9 months old.

Yet if I get them processed into bacon, the bacon will look like solid fat. I have no desire to show people Mangalitsa bacon and have them say "uggggh!" or "do you have some that's more meaty?" It would be hard to be polite.

Right now I'm leaning to selling the bellies fresh - let people make their own bacon, if that's what they want to do.
Posted by Heath Putnam at 10:56 PM 3 comments

I've been very busy lately trying to set up production of Mangalitsa in the Midwest. That's cut into my blogging.

Wooly Pigs isn't moving to the Midwest, but some of our pigs are.

When we are done, we hope to have several farms in the Midwest producing Mangalitsa and Mangalitsa-derived pigs, complementing those from our Washington farm. We will produce a lot more Mangalitsa than we have to date, lowering our prices at the same time.

Producing Mangalitsa in the Midwest should also allow us to more easily deliver pigs or pork to the Eastern Seaboard, something that's been impossible so far due to Washington's remote location.

Although the Midwest produces a lot of low-quality pork, that doesn't mean our quality will drop - because we won't be using typical Midwest breeds, facilities or diets to produce our hogs. E.g. corn and soy isn't always the right feed - so we'll have to truck in the right feed.

There's incredible amounts of unused hog capacity in the Midwest. It is simply amazing: people have small farms set up to run 50+ sows, and they don't have a single hog on the place.

The shift to intensive farming has created a situation where small-scale facilities are unused and decaying, expert hog men aren't running any hogs and you can drive through some of the world's most hog-dense areas and not see a single hog.

Moving our hogs to Midwest will allow the few expert hog producers we work with to capitalize on their skills and facilities. Putting our hogs in the Midwest should allow us to scale a lot faster than we otherwise would.

People interested in finishing Mangalitsa pigs, particularly from East of the Mississippi - should contact me - we'll have trailer-loads of pigs for sale. Although we need to prioritize our existing customers, we expect that there will be some spare capacity in the future.
Posted by Heath Putnam at 4:48 PM 6 comments