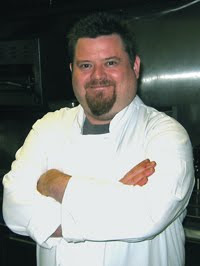 It is getting to be the time to kill pigs. Winter is coming, so it is the right time to cure meat without refrigeration. Also, if you kill the pigs now, you don't have to take care of them when the weather turns really bad and it gets hard to water the pigs (assuming you have a traditional farm, like the Mangalitsa producers in Austria).

Chef Bryce Lamb (formerly of 25 Brix in Gig Harbor) is a Mangalitsa enthusiast. Here's what he told Taste Washington about a year ago:


I have recently discovered Mangalitsa pork. As soon as I assumed my role at Brix 25, I made the call to Wooly Pigs for sample product. To say the least, I loved it. It reminded me of the pork I was able to get when I was cooking over seas. It is so much better than typical American pork. Currently we are using Mangalitsa in a stuffed pork raviolo at the restaurant.

Christoph Wiesner - Mangalitsa expert.
There was a special event at The Herbfarm in early 2009, led by Christoph Wiesner, a man who has dedicated his career to breeding, fattening, exporting, slaughtering, processing Mangalitsa pigs - and teaching people about them. 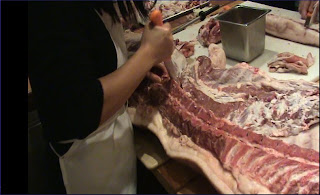 Marie Nguyen of Suisun Valley Farms processing a Mangalitsa.
Chef Lamb attended, where he spent 3 days learning all aspects of how to process Mangalitsa pigs the way the Austrians do.

The 2010 class in New Jersey is modeled on that class. At the New Jersey event, students will slaughter, butcher, cook and cure Mangalitsas, under the supervision of Christoph Wiesner.

Having already attended the 3-day Mangalitsa class at The Herbfarm, Chef Lamb recently went to Austria, to learn firsthand from the Wiesners and others. He sent me an email saying he'll be work with Christoph's butcher for a week. That's Marcel Kropf, Austria's best master butcher. Here's Kropf showing how he cuts up a pig, using Austrian seam butchery techniques.

Chef Stockner on how he uses a Mangalitsa pig.
Look at Chef Lamb's facebook page, I was happy to see the following:

... just butchered and cured 50KL of mangalitsa, cooling down the blood sausage, sleep and Vienna in the AM.

Which is pretty cool. I'm pretty sure he'll kill a bunch more, before he comes home. By the time Bryce is done, I suspect he will be the American chef who is most expert at slaughtering, butchering and processing Mangalitsa pigs into food.

It is likewise time to kill the "mangalica" in Hungary. I found these nice photos on the web, as part of this article. I'm including them here so that people can get a sense of the slaughter phase. Essentially, one takes a wonderful animal, with tremendous personality and cognitive powers, and turns it into a lot of ridiculously tasty food: 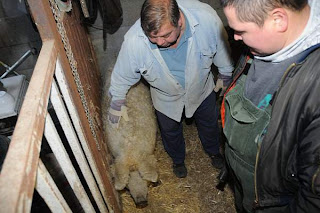 The pig is very cute. 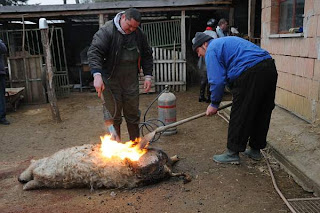 Hungarians burn off the hair, Germans use scalding hot water. 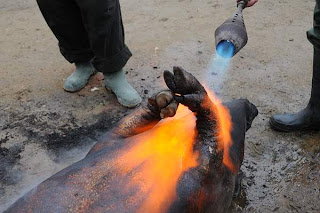 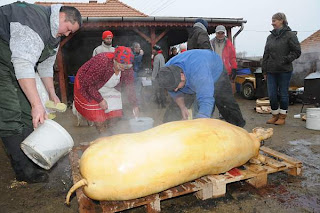 When the pigs are de-haired, you can see how fat they are. There's no muscle definition, unlike typical pigs. Given the size of this pig, I think it might be different than the one shown above. 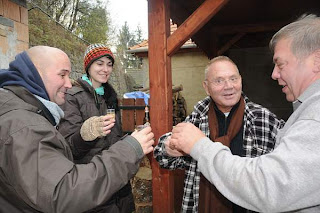 Its a fun time for everyone.
Posted by Heath Putnam at 7:42 PM