The Inn At Ship Bay 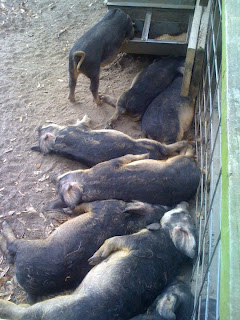 Geddes Martin, owner of the Inn at Ship Bay on Orcas Island, WA sent me the photo below of two of his pigs. Don't look down if you can't stand the sight of blood.

Geddes runs an inn, raises pigs, processes them into food and serves the food at his restaurant. This is a lot like an Austrian "Heuriger". Basically, a farm that sells its produce to the public on site.

We don't have many of them in the USA - they are very difficult to run and make profitable. As a result, when you do find them, they'll either be really low end (underground) or high end, like Inn at Ship Bay, La Provence (a Besh Restaurant Group restaurant), Csarda Haz or Willows Inn (another culinary destination on the San Juan Islands).

If you are running a high end place, and raising and processing your own animals, it makes sense to use the very best pigs available. Hence, these guys favor Mangalitsa pigs. 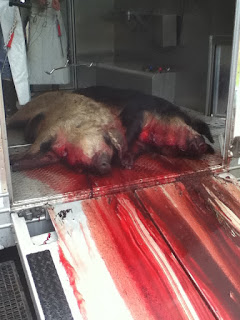 One neat thing is that in Austria, the farmer can kill the pig himself on the farm and take it to the state to get it inspected (something I mentioned in November 2007).

In the USA, unfortunately, we have to bring the slaughterhouse and inspector to the pig in a mobile slaughter unit, which is a lot more complicated! That's one reason why people either kill the pigs themselves (break the rules) or just buy meat from a meat distributor instead of raising their own pigs.

Geddes Martin actually goes through the trouble of keeping pigs and having the USDA mobile slaughter unit come out to his place. Unfortunately for him, that means they skin the pigs (instead of scalding), so he loses a bit.

The photo above shows two of Inn at Ship Bay's Mangalitsa pigs in a mobile slaughter unit. They've just been stunned and stuck. After the photo, they were skinned, gutted, etc.

The photo, gory as it is, reminds me that we get meat by killing animals. There's no way to avoid it.* It is too bad we have to kill them to eat them; they are quite entertaining, even if they aren't sweet; they spend pretty much all day teaching each other who's boss.

So please, don't waste any meat - particularly not Mangalitsa.


* As soon as we've got vat-grown meat that is as good or better than Mangalitsa, I'll switch to it.
Posted by Heath Putnam at 3:58 PM