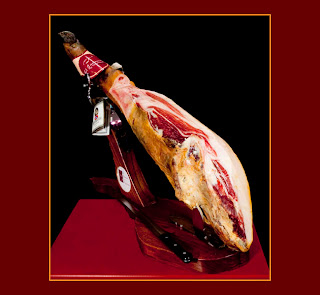 I explained to him that based on how Mangalitsa production is developing in the USA, it would be a while before he'd be able to easily buy the stuff. The obvious sources for those products now are just The Herbfarm and The French Laundry - because they bought older pigs from the first generation farrowed in the USA and cured them.

Many expect that if the Mangalitsa pigs are being produced in the USA, they ought to be able to acquire the cured products they've had elsewhere. But if nothing else, it takes 18-24 months to raise great Mangalitsa for cured products, and then months to years from then on to get the finished products. The Mangalitsa just haven't been in the USA long enough for all that to have happened.

Mangalitsa
I looked on the web and saw that there are more Mangalitsa options in Europe than ever before.

For example, this Spanish site has a number of hams from Iberian (or mostly Iberian) swine and Mangalitsa. This Italian site has Mangalitsa cured products. This site has many Spanish products made from Mangalitsa. Here's some nice looking stuff from Brussels.

The last production figures I saw were 60,000 Mangalitsa slaughtered per year, versus 2,000,000 Iberian. Clearly the Iberico is the favorite now. In the end, I suspect the Mangalitsa (or Mangalitsa crossbreeds) will overtake the Iberico, because growth in lard-type hog production will take places like Romania and the USA, where the cost of production is lower than in Spain.

As I've explained earlier, the Mangalitsa is only in such good shape now due to the actions of a visionary Spanish company; essentially, Mr. Olmos decided to produce Iberico-quality stuff at a lower price in Hungary. How ironic it will be if the Mangalitsa winds up negatively impacting Iberico profits.

In the growth countries like Romania and the USA, raising Mangalitsa (or crosses) makes more sense than Iberian Blacks, because pigs with hair work better. Mostly hair-free pigs like the Iberian Blacks would work in places like Texas and California - but those aren't very good places to raise pigs, due to the lack of cheap feed.

When I imported my Mangalitsa, I tried to get some Iberian Blacks too. It wasn't possible to make it happen. It really would have been something to have Wooly Pigs be the only company in the New World with Iberico and Mangalitsa genetics.
Posted by Heath Putnam at 10:49 PM