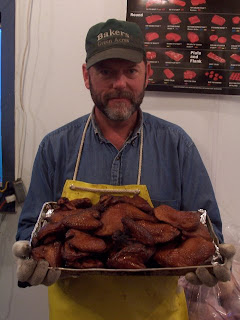 Mark Baker of Bakers Green Acres will fatten their Mangalitsa. In addition to having a temperate Mangalitsa-friendly environment, Michigan is blessed with tremendous numbers of oaks. Bakers Green Acres and Earthy Delights are the first to use Mangalitsa pigs to turn Michigan's acorns into a very high-value product.

Mark attended the 3-day Mangalitsa workshop hosted by the Herbfarm in Woodinville, WA - which allowed him to meet the Wiesners and get advice from them on how to produce Mangalitsa of the highest quality.

Wooly Pigs has now sold Mangalitsa to producers in California and Washington, New Jersey and Michigan.

When I first visited Austria and saw people talking about the quality of their Mangalitsa fat, I thought it was odd. When I ate products from different farms and saw that the quality of the fat determined the quality of the product, I got on board - but I was the only American I knew of with that approach. Two years later, America has several Mangalitsa producers, and they are all focused on producing pigs with the best fat.

Wooly Pigs has succeeded in importing Austrian "Mangalitsa technology" and establishing links between Mangalitsa producers in Austria and America. Now that we've got Americans establishing relationships with Austrian producers and chefs (independent of Wooly Pigs) and even bringing Austrians to America to teach people the phenomenon has a life of its own.
Posted by Heath Putnam at 9:31 AM