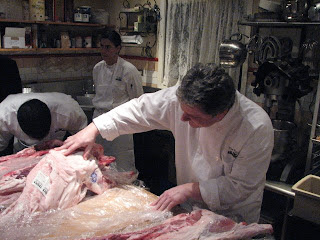 On Friday night, we delivered the first batch of Mangalitsa pigs to our Seattle-area customers. The restaurants are:

This is the first time that American restaurants (other than The French Laundry) have received Mangalitsa pigs.

As The Herbfarm was our last stop, we got to spend some time with Executive Chef Keith Luce and his staff, and watch as they unpacked and inspected our Mangalitsa pigs. It was intimidating to watch them all take turns bending over and sniffing the meat. Some of the chefs just stood stiffly, poker faced, watching everything We'd never experienced that before. We had no reason to think they'd be disappointed, but we got nervous nevertheless. 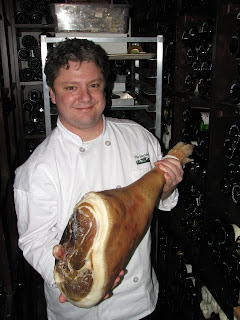 A bit later Keith showed us a ham that he's curing, along with many other traditional products. He and his staff made the ham from the 400+ lb Berkshire that we delivered to him in November. He said that the lardo was already cured and gone, which really surprised us - they must have been using it a lot.

He gave us a sample of some cured loin from our Berkshire hog, which was some of the finest cured meat we'd eaten in America. He offered us a few pieces on a plate, and we had to resist the urge to eat it all very quickly, like pigs.
Posted by Heath Putnam at 3:29 PM

I'm not sure if you're real familiar with who Keith Luce is, but he is easily one of the best chefs in the country. I first had a taste of his food in Chicago at a restaurant called Spruce where I ended up staging for a day, and later found him turning up in San Fran after a stint in CO at what I believe was the highest paid chef gig in the country.

He is, suffice it to say, amazing, and you're damn lucky that someone like him got some of your mangalitsa. He will do amazing things with it, and I only wish I was out that way to get to try it for myself.

I only hope that if I disappoint him for some reason, he lets me know and gives me a chance to somehow make it up to him.

If he finds any problems with those pigs that we delivered on Friday night, we'll have to do what it takes to make him happy.

I just wish it was economically feasible for us to do our own slaughter on farm like in Austria. Then we'd be able to give him and other customers the product they deserve.

Any quality-oriented producer will tell you - things go South the moment the animals leave the farm. The processor can screw up, and then there's getting the animals from the processor to the customer. Too many things can go wrong!

It can happen that you completely waste the life of the pig. For example somebody freezes the meat during delivery. The customer can't use it and nobody wants it; that pig's life was essentially wasted.

check out that site to get free money for paypal, no joke