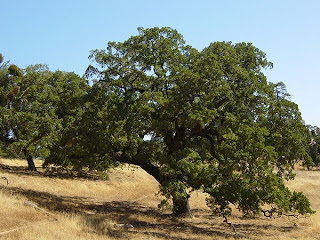 I'm happy to announce that a load of Mangalitsa will be leaving Washington for a farm near Livermore, California. The purchaser isn't set up to take calls yet, so I'm withholding his contact info for now. Let's call him Mr. Oak. [He's now revealed to be Kylan Hoover -- (925)321-1210, kylanhoover@gmail.com]

This is a huge deal for Wooly Pigs: until now, we've been the only providers of Mangalitsa pork (and more generally, pork from European lard-type breeds) in the Americas. Now there will be two, and one will be in the Bay Area, one the USA's best markets for super premium food.

Of all the Californians who've contacted us about our Mangalitsa, Mr. Oak best understands the systematic approach to pork quality that we learned in Austria. By using our lard-type pigs and feeding them the best feed[1], and by controlling other important factors, Mr. Oak will produce the best-tasting pork in the USA. 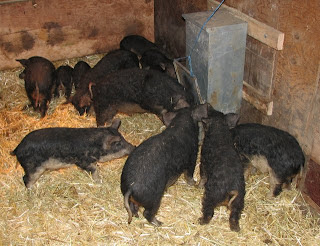 These Mangalitsas will be at least 9-months old in November.
Due to his breed and feed advantages over all other producers, Mr. Oak will have the best pork in the USA. That includes the 9-month acorn-fattened Mangalitsa and Mangalitsa-Berkshires he'll have in November.

The people who've eaten our Mangalitsa and had the typical "revelation" response[2] have a hint of how good Mr. Oak's pork is going to be. Yet Mr. Oak's older, fatter, acorn-finished Mangalitsa will taste better than anything we've produced yet.

I'm simply relieved to put my pigs in his hands.

It could be a mistake to sell Mangalitsa to someone in the Bay Area who'd hype them (e.g. "acorn-finished Europigs!") but then cut corners or make mistakes, potentially tarnishing the Mangalitsa brand. That's a real possibility: there are producers in California with oaks who produce worse pork than our Berkshires. You can start with advantages but fail to capitalize on them.

With Mr. Oak on board, we can rest assured that there will be at least one Bay Area producer raising Mangalitsa to the highest standard.

As soon as Mr. Oak is ready, I'll be directing California customers (and those who want the very best) to him.


[1] Acorns are high in monounsaturated fatty acids, which produce superior pork fat. They are also high in phenols (tannins), which give the pork a nice flavor (just as oak barrels or oak chips make wine taste better). Acorns are the best known feed for pigs. Acorn replacement diets help but don't work perfectly.

[2] Most people respond very positively to Mangalitsa. Rebekah Denn, food editor of the Seattle Post-Intelligencer, foodie Matt Wright and this culinary student have written things like: