I visited The Herbfarm's Mangalitsas today and took the photos below. 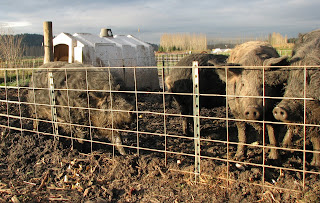 That thing on the left looks like it belongs in a zoo. It is a hairy and wet creature. 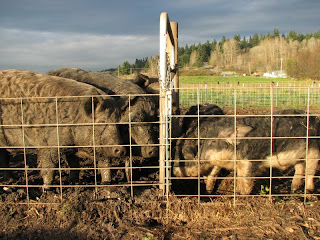 The newest arrivals (right) have gotten a lot bigger since they arrived. Head Gardener and Herdsman Bill Vingelen has them on organic hog mash, as per the instructions of Executive Chef Keith Luce.

On the far left there's a Mangalitsa-Berkshire cross. He's nearly as big as the 16 month-old purebred Mangalitsa, despite being about a 4 months younger. 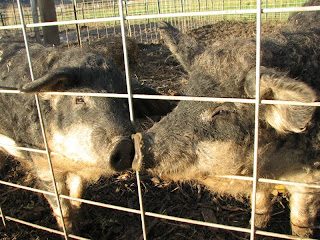 A closeup of their little pigs. They are friendly and trusting. 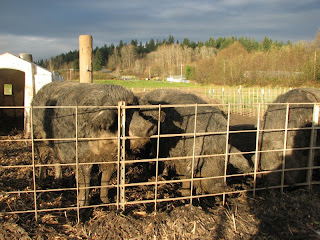 One thing about pigs is that no matter how big their pen is, they prefer to hang out, cheek by jowl on the fence, occasionally gnawing on it.

When it rained, the hogs dug everything out and the whole pen flooded. To help the hogs stay dry, they put chips in the front. The ground is raised up significantly. If the hogs wanted to, they could leap that hog panel. They are content to spend their time eating, sleeping and playing. 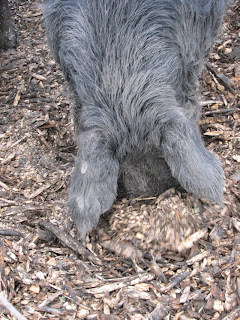 Above you can see a hog having fun by rooting in the chips. He jams his nose in the dirt and flips up his head. They root even when they've got plenty of food, explaining why feral hogs are so hated. 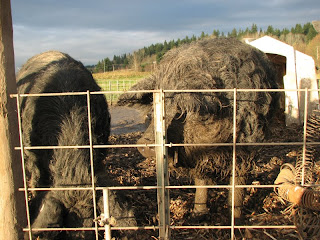 When the hogs are gone, Bill says he'll plant corn in the pig pen. The hogs have been dunging in there for months so there's a lot of nitrogen to utilize. Corn is good because it needs nitrogen and the part that humans eat is far from any bacteria on the ground. 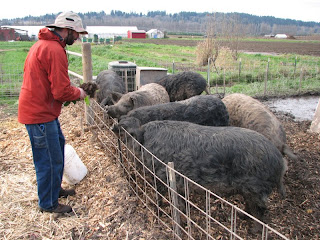 The pigs line up at feeding time. Although they've got a feeder, the novelty and surprise factor is very compelling. Bill says they absolutely love greens and any forage, including grass. Such feed is good for the fat quality, because of the antioxidants. 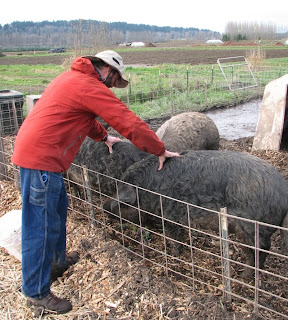 Bill's Mangalitsas love him and like to get touched by him.

There's a book whose title (in German) is "Healing Pigs Naturally". It is about alternative medicine - for pigs. Among other things, you can massage them and feed them special plants that kill parasites (instead of drugs refined from those plants). I know Bill will grow those plants for the pigs if he can; that's very Herbfarm.
Posted by Heath Putnam at 7:46 PM

"There's a book whose title (in German) is "Healing Pigs Naturally". It is about alternative medicine - for pigs."

All due respect and I love how your product turns out, but the book looks like it delves into a load of rot and best avoided by farmers everywhere.

Pharmacognosy is hardly "alternative" or questioned by any involved in medical science, but dosage, consistency of potency, and effectiveness should be of concern.

The homeopathy, bach flower therapy, reiki, "bioresonance therapy", endorsed in the book is crap, therapy, massage, reiki, lithotherapy, and the questioning of the disease model are at best pissing money and hours away on nothing, at worst dangerous to the health of your stable.

I also live in the Pacific NW, and buy quality US-produced food for my pets, and still can't help but feel pained when I see the inevitable "homeopathic wormers" sold in the same aisles.

I hope I'm not sounding too preachy here, I have no problem with avoiding the over-medicated factory farming model and wanting to go at it a more natural way, but there is by no means only the false dichotomy of an homeopathic "quality" product and the factory-antibiotic model. It's absolutely possible to fuse modern science with responsible and artisanal breeding.

You misunderstood what was intended to be a joke. Bill isn't giving the pigs Reiki massages.

However, growing herbs that contain the dewormer is a smart thing - if you've got a professional gardener like Bill on staff. It is natural, effective and cheap.

If a pig gets sick, I use conventional meds. It would be inhumane to do otherwise. I don't think homeopathy works, so I don't do that.

In general, using subtherapeutic meds to promote growth is a bad idea, as it ruins your meat quality.

If a pig gets sick (or is at risk of getting sick) and you medicate, you follow the law and withdraw the meds (the appropriate time) before slaughter.

"You misunderstood what was intended to be a joke. Bill isn't giving the pigs Reiki massages."

Oh I figure, thanks for the response :)

I guess it's just my venting about how entrenched the more snake-oilish forms of alt-med seem to be in farming and farmers (my grandparents specifically, one a botanist and one raised on a farm, both subscribe to all sorts of silly and harmless to terrible ideas about health and medicine)

These sorts of ideas have been around as long as farming and breeding, I suppose, but one book I came across recently seems to tie it all together, along with the US "country culture", talk radio, the introduction of public relations campaigns, and even modern political campaign strategy to this day:

It's fascinating if you're into historicals :)

Chris - Thanks for the book tip.

Here's something about the history of pig-keeping that you don't hear about every day: