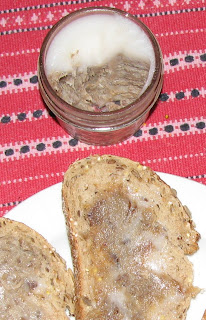 I used the 50/50 Mangalitsa trim. It is mostly from the chest of the pig. That's some of the worst fat on the pig, because it is stringy and soft. Nevertheless, that cut of a Mangalitsa is still very valuable, because the fat quality is so high.

I started by cutting the meat and fat up. I removed the arteries, pericardium and blood as I cut the fat up. Then I put it in the slow cooker. 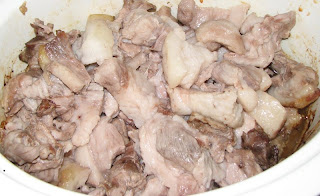 I left the first batch in overnight. When I woke up, the fat was bubbling and there were meat chunks cooking in it. Some of them were hard and brown, so I took them out. The second batch I did during the day, and I added water to them as they cooked, so I didn't burn any.

With both batches, after cooking the meat, I used a colander to separate the meat and the fat. Then I shredded the meat with forks. 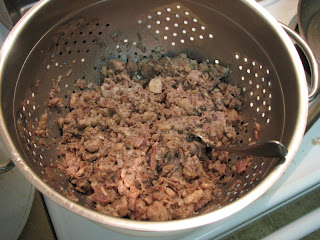 Then I put the meat into a pan and heated it longer, after adding salt and spice (just garlic) and a lot of the original fat. Rillette recipes seem to suggest 60% lean and 40% fat, but I used more like 50-50. Mangalitsa fat is so light that using more isn't usually a problem.

Because the rillettes are normally eaten cold, I made sure to put in what seemed like extra salt. 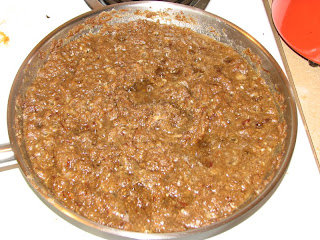 After 30 minutes of simmering, to distribute the flavors, I packed the meat in jars, added a covering of fat and stuck them in the refrigerator. The result, when cooled, looked like the photo at top.

Later on I ate some of each batch. The one that was darker had a stronger taste and was overall more satisfying. Both of them were incredibly tasty.

The biggest surprise to me was that I was able to turn what wasn't very desirable product into something really tasty.
Posted by Heath Putnam at 10:00 AM

Yum! I was an exchange student in Le Mans, home of rillettes. That looks awesome!