Mangalitsa Compared to Other Breeds 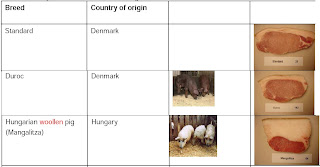 The loin cuts varied from breed to breed.

I found a preliminary report on the web that compares meat quality across breeds. The researchers bought meat from different producers, then ran a tasting panel. This includes standard crossbreds and many "heritage breeds".

Such an experiment doesn't isolate environmental effects from genetics. Just look at the photo above of their samples - the Mangalitsa was clearly much older and (ridiculously) fatter than the other pigs.

Yet such a study does give useful information to consumers, who typically have to choose from several options. Breed is the primary factor that determines meat quality, and it is the one (as opposed to feed or age at slaughter) that the consumer can control when he purchases his meat.

There is tremendous variation, and Mangalitsa really stands out:

Especially the content of intra muscular fat (IMF) and pigment varied between the breeds. IMF varied from 0.9% (Hampshire) to 7.5% (Mangalitza). One single Mangalitza had an IMF of 11.8%. Mangalitza also had the highest content of pigment (61.8 ppm), while Standard had the lowest content (19.0 ppm). 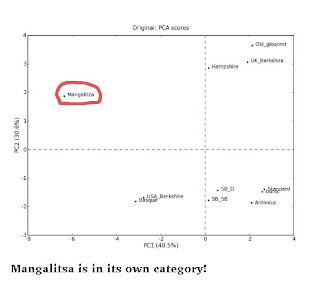 Although this test look at meat quality, I am confident that had it examined fat quality, the Mangalitsa would have likewise been superior. As our customers will tell you - Mangalitsa chops taste better than normal ones, but Mangalitsa fat is really where it's at.

With the "heritage pork" market growing, it is nice to see a study that show not only that there's a lot of variation across the heritage breeds, but also that Mangalitsa is of particular value.
Posted by Heath Putnam at 3:19 PM