Here's some photos I took at Mosefund's 2010 Pigstock (the first 3-day session). I finally solved my hardware problems, allowing me to upload these: 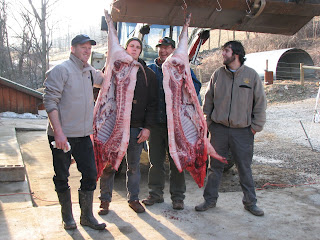 The top shows Spike, owner of Woodberry Kitchen, with his team and the pig that they killed, de-haired and eviscerated. They are happy and proud to be done with their pig because it takes a lot to go from a live pig to nicely split halves - more on that in another post. 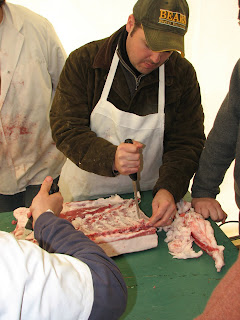 Here's Morgan Weber of Revival Meats preparing a side to be made into bacon. He's very serious about meat quality. 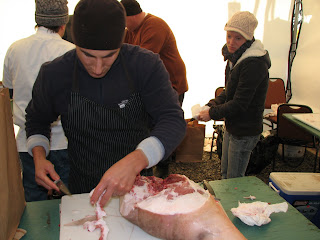 Michael Leviton of Lumiere (Newton, MA) - a friend of Jason Bond (another Massachusetts chef). Michael did an excellent job cutting his half. He was so serious! I'd hate to compete with him. Here's a profile of him from 2000 Food & Wine - profiled as a best new chef.
Posted by Heath Putnam at 7:02 PM

Heath - thank you for these reports and photos. This seems like a tremendous event, and I'm sure more than a few of your readers wish we had been there.

Richard - it was an amazing event. The hosts, instructors and students all worked together to make it magical.

For people who love to eat Mangalitsa (or even those who just appreciate traditonal food culture), I can't imagine a better event.