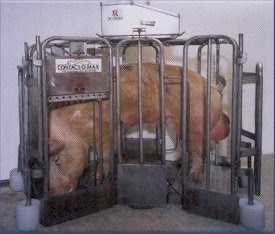 This boar cart will seem primitive in a few decades.
James McWilliams has a thought-provoking article about vat-grown meat. Although he's a vegetarian (and many vegetarians strike me as irrational), he and I agree on many things.

I've thought about in vitro meat (and fat), and written about it previously. When we can produce meat (or tasty fat) in vitro, a number of interesting things will happen:
My own feelings on vat-grown meat haven't changed, and are fairly similar to those of McWilliams: if it was possible to eat the food I want to eat without having to slaughter animals, I'd be happier. Of course, eating what I want to eat has required a lot more than just being willing to eat meat.[1]

The article mentions that some advocates of small agriculture are against vat meat. They fear that it will be worse for small farms. Perhaps it will - but is it really so great right now? Small farms producing commodities are always disadvantaged - because they aren't as efficient as their competitors.

It is hard to see that vat meat is more of a threat than Big Ag to small farms.

As I have written before, my focus has always been on the food and processing, the people and the live pigs, not the farm (physical location of agricultural activity). I care about the food, not whether or not it comes from a big or small farm, or a farm that is 61 versus 60 miles away.

[1] If it had been possible to eat the products I wanted to eat without importing pigs and setting up a breeding, fattening and processing network, that would have been a lot more convenient. Unfortunately, you can't have Mangalitsa products without the genetics (because they really are special), special fattening techniques and processing techniques.
Posted by Heath Putnam at 10:29 PM