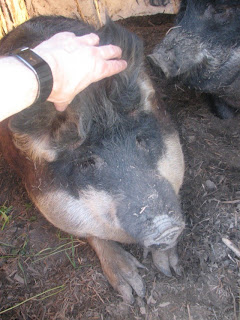 Mangalitsa pigs at The Herbfarm, sporting huge jowls.*
I visited The Herbfarm yesterday. I dropped off some products for Ron, thanking him for helping to get the word out about the breeding stock sale. I brought him some lardo, belly speck and jowl speck.

I had the staff open up the speck and give me some feedback on it, making sure to leave plenty for Ron to eat.

Sous Chefs Chris Weber and Ben Smart have the most experience making cured Mangalitsa products there, so I definitely wanted to see what they thought. Everyone who ate it thought it was very good, including Chris & Ben.

Chris and Ben are pretty amazing; they can do the sorts of things that Mangalitsachef does. 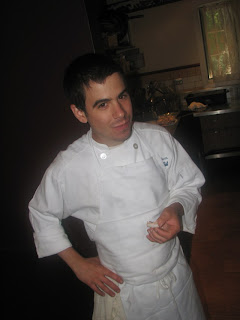 They definitely thought the jowl speck and belly speck would have different uses. It wasn't clear what those uses would be - they'd need to experiment. 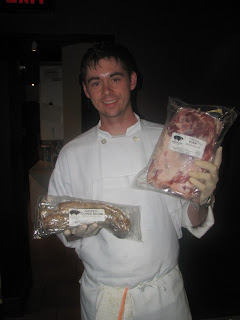 Ben Smart holding belly speck and neck.
I brought a neck to show them, Ben took it an asked me to bring more next week. Ben likes to make cured Mangalitsa neck. Our Heath Putnam Farms Austrian Pig Neck - or a few cases of them - is what he needs.

Ben mentioned that they'd asked around to see if they could get some pig necks - but that nobody seemed to have them.** That's because in America, we don't typically make the most of our pigs' shoulders. 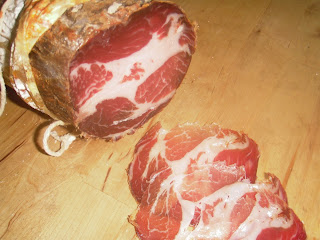 Photo by The Sausage Debauchery.

Chris gave me more info on his simple ham recipe, which I'll include here:

1) Take a frozen leg of Mangalitsa. Seam it out. Look here for more info (big PDF!).

3) wipe/Knock the salt off. Hang the meat in a wine cellar (55F, approximately 70% humidity) for two months.

I'm thinking I want to make some of those. It tasted great considering it only took 65 or so days to make.

* One thing that impresses chefs is the size of Mangalitsa jowls. If you look at the pig up top, you'll see its jowl is huge, compared to my hand. Its jowls will probably weigh 6+ pounds each. The jowl is mostly fat. Meat-type pigs have very small jowls, and they don't taste as good.

** Although some sell a "pork collar" or CT Butt, it won't typically be as long and nice as ours. We break our pigs between ribs 5 and 6, because that's where we need to cut to get a paleta out of the pig. Most American butchers cut at rib 4, which destroys the shoulder muscles of the paleta, producing a relatively worthless picnic. You can cure picnics (as you can any piece of pork), but because of the cutting through the muscles, they dry out more than the paleta.

If you are reading this and want to learn how to cut pigs from our seam butchery experts, contact me; they get a lot of experience.
Posted by Heath Putnam at 6:24 PM

Might have to try this one out. We've got a big ham hanging now, but it will hang for prob at least another 8-12 months or so. It would be nice to taste some in the near future. Thanks for the info Heath!