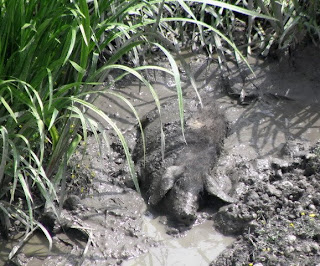 Wallowing Mangalitsa
2008 was a huge year for Wooly Pigs. Although the first Mangalitsa pig ever was sold to The French Laundry in 2006, 2008 was the year that Wooly Pigs introduced the Mangalitsa to American consumers. People could, for the first time ever, to go to a farmers market and buy retail amounts of Mangalitsa, some of the best fat (and meat) in the world.

Before introducing Mangalitsa to the American market, I had to make some basic decisions. One was how to spell the breed.

As someone who likes Hungarian culture, the most natural would have been to choose the Hungarian spelling, Mangalica. Unlike popular breeds of pigs, it hasn't changed substantially since 1833. The different Mangalitsa breeds only exist because of Hungarian breeders. Why change something that's been the best in its class for 175 years?

Yet choosing Mangalica would have meant hearing Americans mispronounce Mangalitsa indefinitely, so I decided we needed something different.

I tried looking at what other Mangalica importers chose to call their pigs. They'd likewise had to introduce an exotic breed with a foreign name to their home countries.

When Tony York imported the breed to the UK from Austria, he chose to use the German Mangalitza. French importers of the pigs also chose to use Mangalitza, despite them already having Porc laineux. Those terms seem to have "taken"; the British Pig Association uses it, and French breeders discuss their Mangalitza pigs online - despite Mangalitsa appearing in print for decades. Perhaps that's because Mangalitza has appeared in books even longer.

At the time, I chose Mangalitsa, because it is an accepted English term for the breed reasonably close to the Hungarian (although "mongalitsa" would probably lead to Americans saying it like the Hungarian).

Also, mangalitsa.com was available. If you are going to bring a new food to the Western Hemisphere, all the better if you can register the domain name.

Things should get interesting in 2009, with Monte Nevado exporting Mangalica. Some national food magazines will publish something about the pigs in the next few months. It will be interesting to see what spelling they go with.
Posted by Heath Putnam at 4:48 AM

Thank you for caring about the pronunciation!

Are you aware of how they came to be so rare?

When the soviets took over Hungary, they tried to stamp out the national identity. Mangalica and the Hungarian grey cattle were synonymous with Hungary...so the Russians tried to wipe them out. Hungarians resorted to hiding the animals in their homes!