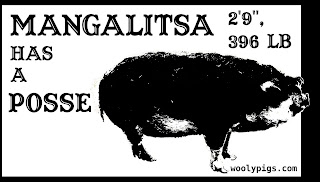 I've been very busy lately with the Wiesners visiting.

They held two workshops about Mangalitsa processing and cooking. One was a 3-day workshop at the Herbfarm, another was a 1-day workshop in Seattle held at Culinary Communion.

The Herbfarm event allowed Christoph and Isabel Wiesner to transfer some critical Mangalitsa skills to the USA. It also gathered a lot of the New World's Mangalitsa producers and enthusiasts under one roof for 3 days. Some participants came from as far away as Michigan and California to learn from the Wiesners.

For example, Christoph showed the students and staff how to break down pigs using seam butchery techniques. That technique, compared to the typical NAMP breakdown, results in almost no waste. I'll be posting videos of Christoph breaking a hog into pieces on YouTube soon.

A Mangalitsa has very little meat on it. Feeding it properly ensures that the thing you have to sell - the fat - is as useful as possible. Cutting the pig properly ensures that the valuable meat on that pig doesn't get wasted and wind up in the soup. Watching people learn and practice Christoph's techniques - particularly things like the butchery, which aren't documented well in English books - was great.

A year ago, most of the people who attended probably didn't know what Mangalitsa was. At the end of the event, it hit me that there are a lot of Americans who care a lot about Mangalitsa pigs and their delicious meat and fat.
Posted by Heath Putnam at 12:11 AM

I am so delighted to finally find some evidence of the use of the wonderful Mangalitsa in the USA!
Mangalitsa Salami is the best Salami in the world...Period!
Thank you for sharing these very important videos and all of the information!
Christoph seems to really know his stuff, only his English needs a little help.That wouldn't bother me one bit because I am fluent in German.

Andy, where'd you buy it? I would love to get my hands on some.