Mangalitsa Gilt Star of the Show 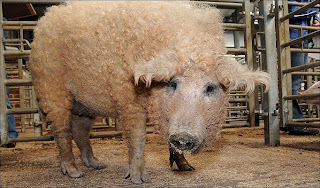 A Mangalitsa gilt was the star of the show at a British auction.

The point of the Mangalitsa isn't that it is a beautiful curiosity. The point is that it produces the world's best meat and fat. If you are going to eat meat (with all that entails) it, it might as well be a Mangalitsa.

Here's my understanding of why the British aren't marketing their Mangalitsa pigs as food to the most quality-sensitive consumers:
Wooly Pigs, in contrast, was founded to bring a new super-premium food to the western hemisphere. The project, all along, has been about creating a new wonderful, addictive, consumable - for which there are currently no domestically-produced substitutes.

A big part of that - too - has been working with Europeans who know how to make the pigs taste the best, and how to use the pigs to the greatest effect in the kitchen. As best I can tell, every Mangalitsa producer understands that what the pigs fatten on is crucial (along with other environmental factors). I don't see producers in Britain talking about what they feed their pigs - telling me that they aren't thinking about the pigs as producers of the tastiest meat and fat. That's too bad - the breed is a lot more likely to survive if people love eating them.
Posted by Heath Putnam at 9:36 AM