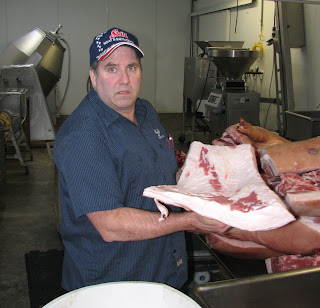 Swiss kills and cuts our pigs in special ways that help to maximize their value. As extreme lard-type pigs, ours are so different from regular pigs that we need very special processing to meet our goals.

Swiss's staff has been trained by Christoph and Isabell Wiesner - people who have been instrumental in teaching people about how to maximize the potential of Mangalitsa pigs. That includes producing free butchery information, as well as teaching hands-on classes for serious hobbyists, chefs and meat processors.

Worst of all, the consequences of some slaughter mistakes are such that we and our processor customers can't detect them - only the final consumer will. 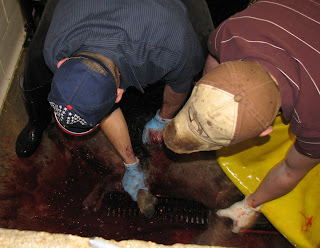 Bleeding on the ground, pumping the shoulder
Our pigs are lowered onto the kill floor in a group and kept in a pen. The slaughterer stuns them and bleeds them out one by one. That takes more time than just killing each pig in the kill box. It is dangerous and unpleasant work for the workers - they are in their with a bunch of big pigs, working with knives, trying to flip over a stunned pig while the other pigs try to get away from the commotion.

The pigs don't know what's going on; if they knew, they'd try and succeed in busting out.

When sticking a pig, the slaughterer tries to sever the major arteries while avoiding a shoulder stick, which would ruin the neck cut. The goal is to have the blood gush out of the hog. It takes practice and will to get good at that.

After the stick, a worker pumps a front shoulder to get all the blood out as quickly and thoroughly as possible. It is very good that Swiss will do this for us; we want every drop of blood out of the carcass.

Many slaughterhouses stun a hog, shackle and hoist it by a leg and then bleed out the hog. That is fast, cheap and less dangerous. According to Christoph, there are major disadvantages:
Proper bleeding is very important, because the hams and shoulders will get processed into products by Johnston County Hams. If we don't get all the blood out, there can be blood spots in the finished hams and shoulders. The costs of those mistakes are high, because by the time they are noticed, the hams have been processed and perhaps even distributed. 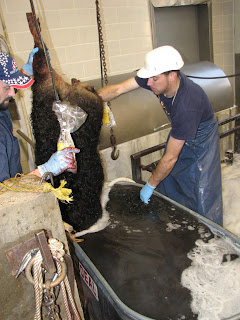 After bleeding, goes into tank before scalder
Because our pigs are so hairy, they go into a tank filled with warm water and lye before they go into the scalder. That helps us to get the hairs off quickly.

The inspector at Swiss understands that we don't want him to slash the jowls while he does his job. He doesn't, because the pace is so slow. If he habitually slashed jowls, we'd have Swiss employees cut the jowls (carefully) instead of having him cut - that would satisfy the legal requirements, while allowing us to minimize slashing.

It takes a lot more time and labor to kill the pigs the way we kill them, and it costs a lot more money - but we are just lucky to work with a plant that can meet our needs. 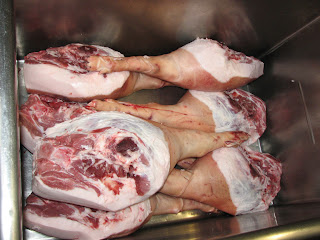 Hams ready for processing.
After the pork cools out, the butchers cut the pigs into the special cuts we produce. They've been trained how to do this. The butchers specialize. For example, as much as possible, the same worker does the same piece. That allows the butcher to get good and fast. 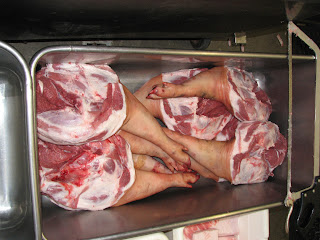 Shoulders ready for processing.
I've written before about the shoulders. To my knowledge, Swiss Meats is the only USDA-inspected kill facility in America that produces these. 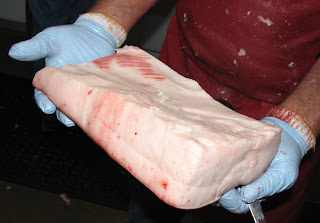 I consulted with Christoph on how to get the most hard fat. The goal is to get the biggest pieces possible, without slashes. Christoph made some suggestions. The staff at Swiss took that information and figured out how to cut the pigs. The following pictures show their method.

I don't think any other USDA-inspected kill plant in the USA can produce stuff like this. That's not too surprising - most people don't raise pigs remotely like ours.

In a nutshell, the butcher removes the loin (with ribs and spine), then removes the ribs, then cuts out the finger meat. It takes skill to know where to cut so that the final pieces are separated properly. 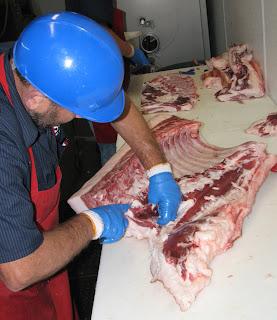 First the butcher separates the loin from the belly, where the fat becomes too soft. 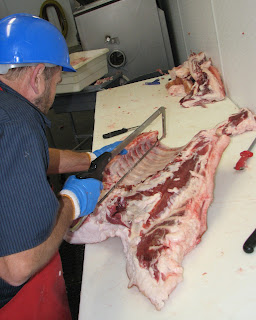 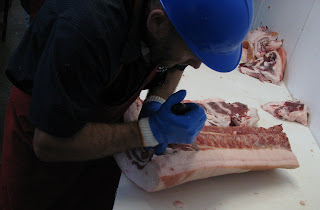 He starts removing the fatback from spine side of the loin. Sawing the ribs make this task easier, because he can fold the loin back away from the fat. 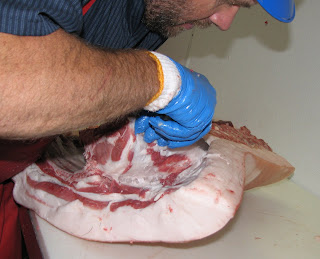 He's cutting out the loin, leaving as much fat on the fatback as possible. 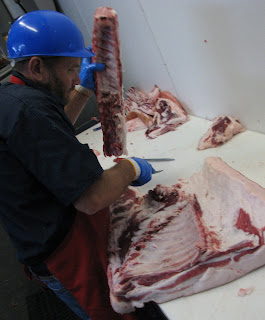 He's removed the loin. That goes to the loin specialist, who will remove the ribs and spine. 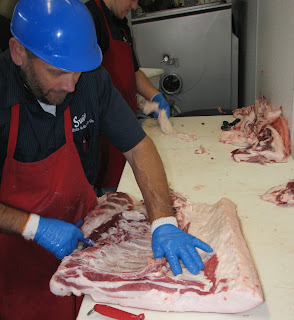 The butcher uses a rib puller to remove the ribs from the belly. He removes the breastbone too. 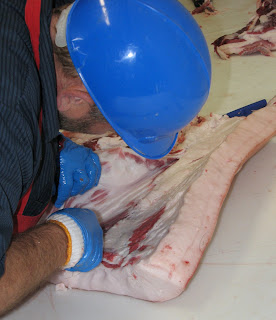 He pulls the belly meat back from the fat and cuts it. He has to know what muscles belong on what piece. 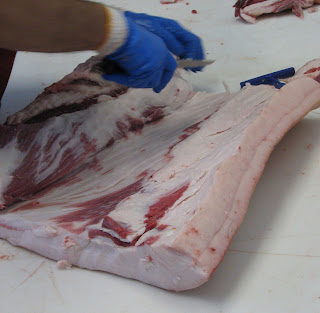 Most of the belly removed. The meat left on the fat is thin. If the meat isn't covered in hard fat, he has to remove that fat. If the fat is hard, it should stay. 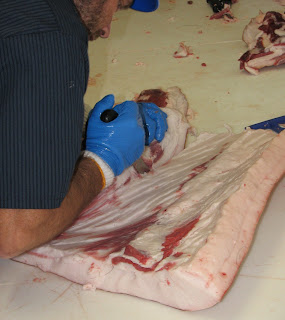 He cuts where the fat becomes too soft to make lardo, separating the belly from the fatback. As a result of peeling back the belly meat, the bellies are missing fat and skin along their top. 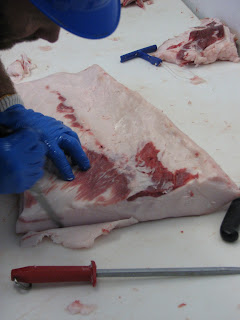 He trims it up. There's very little lean; the 14-lb piece of fat is almost entirely hard fat for lardo. There's probably only half a pound of meat on it. 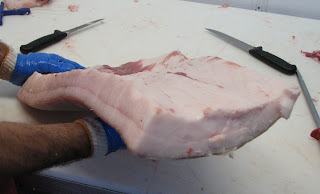 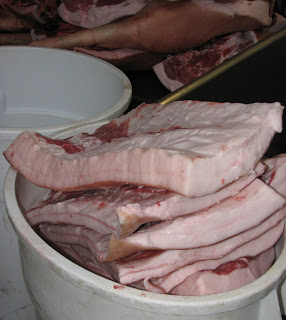 ... into the container holding all the other slabs of fat that will get turned into lardo.

Meanwhile, the butcher cutting the fat off the neck produces fat for lardo too. These pieces are the hardest and highest quality: 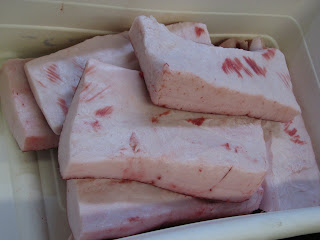 Fatback from the neck.
Loin

As a result of cutting the pigs this way the sirloins and rib-loins are leaner, because most of the fat gets left on the fatback. 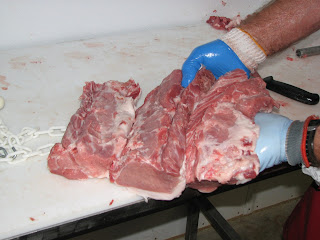 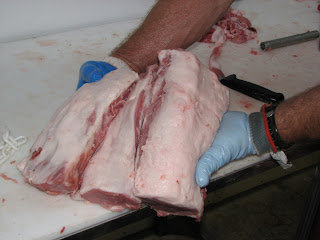 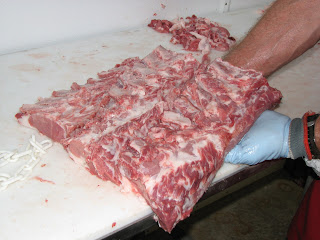 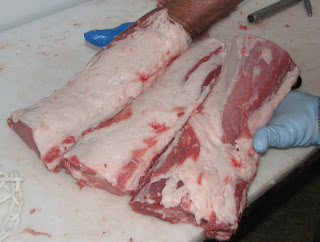 Unfortunately, very few chefs (or even meat processors) can buy a half a Mangalitsa, butcher it and process the meat into usable products - and make all that work pay. Even chefs who regularly use meat-type pigs in their restaurants can't typically do it, because Mangalitsa pigs are so different.

As the pictures show, Swiss Meat and Sausage Company is expert at slaughtering and cutting our extreme lard-type pigs. They are playing a key role in preserving Mangalitsa genetics in the USA, by allowing Wooly Pigs and its customers to make the most of its unique pigs. Because they are able to turn our pigs into high-value cuts, we can keep producing Mangalitsa purebreds and hybrids.
Posted by Heath Putnam at 10:34 PM

Heath,
how do we get our butchers here in Florida the training to produce these cuts? These guys are talented but provide us with the same cuts they have been doing for years. I feel we are not getting seam butchery products and the hybrid mangalitsa that we get is a great product but I would like to see the difference in product based on how we receive it. I'm all for anything that will improve what we receive, I don't know if anything will change in terms of the kill with our facilities here but the neck and shoulder meat seems like it could benefit greatly from some butchery direction. Any input is appreciated. The optimal situation is to come see you with my charcuterie guy and get some first hand experience. Maybe an early fall project to work on.

The shoulder is the biggest difference. If you can just learn how to do that and get them to change that, you'll be way ahead.

Getting the fat off the way we do is a refinement on the basic method.

There's a few ways to go about you teaching them.

1) Send your guys to Swiss and they can learn on my pigs.

You learn how to do the stuff in this booklet: http://woolypigs.blogspot.com/2010/03/first-mangalitsa-processing-tutorial.html

There's a few key techniques (not cuts, but techniques) that aren't covered in that.

E.g. to remove a muscle (e.g. cheek) from a bone, you have to cut through the muscle and through the silverskin, to the bone. Then you peel that muscle back and use the back of the knife to scrape between the bone and the silverskin, peeling the entire muscle, membrane intact, off the bone.

There's some other tricks too - but that one I mentioned is the most important thing you need to learn.

Then buy some rib pullers.

After you watch that and can do it, teach your guys to do it.

The key thing is, they have to care. If they don't care about doing what you want, they won't do it for you.

Also, it is a lot easier to get them to pay attention and learn in slow times.

We trained our guys at the end of January, the slowest time of the year at Swiss.

OK, I've thought about it some more.

How about you visit Swiss, stay long enough to learn how to do things the way you want, then go back to FL and teach your guys?

You can visit when they process 40 or more halves. That would give you practice.

Thanks for the info, I would love to get out there. Would have to be towards the end of summer before I get a break from business here. We'll talk more.

Heath, thanks for this post. It is very helpful in multiple ways. Oh man I need to get me some of the fatback for making lardo. It looks amazing.

out of interest, why are a bunch of pigs in a pen in the killing floor, rather than just one? That seems unhumane to me. Seems like a lot of undue stress on both the pigs and the worker.

Matt -- a lone pig is a nervous pig. If you killed them all one-by-one, each pig would be nervous.

Although the pigs see the other pigs getting stuck, they don't seem to comprehend at all what's going on. They certainly don't act that stressed or like they really want to get out.

When pigs really want to get out, they'll bit, climb and jump, potentially hurting themselves in the process.

It is clear that they want to get away from the humans, but that's about it.

Are these cuts vacuum-packed and frozen, or are they sold fresh?. If frozen, how does that affect quality and cook time?

Tom Y - They get sold never-frozen and frozen.

Freezing impacts water retention a bit, and reduces the time it takes for salt to penetrate the meat (if you are curing).

Most chefs I know who like Mangalitsa don't mind it being previously frozen, because it is still a much better product than meat-type pork (frozen or never-frozen).

Simply Amazing, what and education. I live in MI and I have heard that these pigs fare well here, but without the complete operation of the farm and slaughterhouse, just raising these woolly beautiful fatty animals wouldn't be worth it. Wish I had enough capitol to start a complete operation. Pork in the USA has been de-fatted so badly that the taste really isn't worth the calories. Thanks for a great article.

Hi, you mentioned blood spots - we had some ham recently which had spots of blood on it or running through it. I chucked it out as I thought it was unsafe, is this the case? Thank you