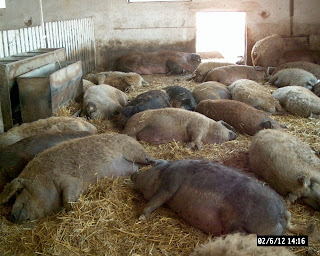 Crossbred Mangalitsa Hogs in Europe
We'll have pork from Mangalitsa and Mangalitsa-Berkshire (50%-50%) market hogs at the farmers market very soon.

It will be interesting to see what people prefer. In the future, we'll have 100%, 75% and 50% Mangalitsa market hogs. My guess a while back was that we'd be selling a lot of 75% Mangalitsa hogs. As in Europe, those would probably get described (by wholesalers or restaurants) as "Mangalitsa", while the 100% stuff would show up on menus as "purebred Mangalitsa". 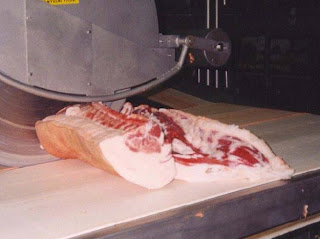 Purebred Mangalitsa isn't for everyone. 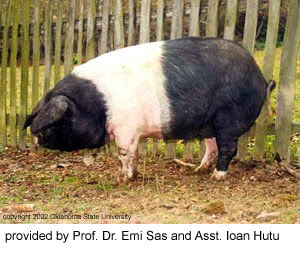 Bazna swine - leaner than a Mangalitsa.
It is hard to know what to do with the 50/50 hogs - their very existence makes it hard to make the 75% and 100% Mangalitsa seem so special. But for many consumers, the 50-50 hog may be the most appropriate - instead of eating a hog from the 1920s (the Mangalitsa), the hog of the 1940s (the 50% Mangalitsa) may be a better fit. Perhaps the right thing to do is to come up with a name (e.g. Bazna) and market those 50-50 hogs that way. Don't even bring up the word "Mangalitsa" in conjunction with them.

Experience from Spain suggests purebred Mangalitsa won't find a huge market. I found a document on the web about the Iberian pig breeding program. It starts on page 510. The Of course, the Spanish breeding system has been modernized, so things have probably changed quite a bit.

Like the other document, it mentions that the super-lardy hairless Iberian varieties are so uneconomic they are in danger of disappearing. The best hope for them is using them to produce crossbred market hogs. That's similar to the Pietrain's role. A super-muscled breed, the Pietrain is so lean that most people don't want to eat it. Its major role is in crossbreeding programs, like the hairless Iberico. 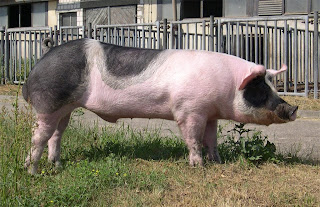 Pietrain - famously bad eating.
The fact that a breed is mostly good for crossbreeding doesn't mean that it is doomed. The Iberian breed is doing well, despite it being used in crossbreeding programs. If the Mangalitsa achieves anwhere near the success in America that the Iberico has achieve in Spain, even if it is via crossbreeding, the breed will be on very stable footing.
Posted by Heath Putnam at 2:26 AM