There's an article in the New York Times, "Bringing Flavor Back to the Ham". Here's some excerpts, with my comments.

Happily, the home ham picture began to brighten a few years ago. I recently tasted dry-cured hams from Virginia, Kentucky, Tennessee and Iowa, and some rival Europe’s best.

American standards for cured meat products are very low, and have been that way for a very long time. The American products made from meat-type breeds aren't comparable to Europe's best, because of fundamental differences in genetics. Breed and feed are very important.

They have made significant progress by rediscovering the ingredients that made dry-cured ham so good in the first place, when pigs were fattened on the autumn harvest and their meat preserved for scarcer times.

Above all there’s the pig, which should be mature, well fed and free to run around.

Spain and Hungary's lard-type pigs, raised in pens, make better cured products than the ones mentioned in the article. Most iberico products, generally considered to be the best, are raised in pens. The bellota product comes from iberico that typically live all but their last 90 days like the others.

If you look at what one of Spain's foremost meat scientist writes about raw material and cured products, he doesn't emphasize activity - he emphasizes breed, feed and age at slaughter. 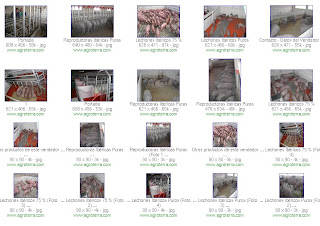 A century ago, American country ham makers had the pigs and took the time. A Virginian named Samuel Wallace Edwards once wrote that when he began his career in 1910, he worked with mature hogs “that roamed the woods and fields of southern Virginia, gleaning the acorns, roots, peanuts and corn” after the fall harvest. After a salting in the winter and cold-smoking in the spring, the hams hung for up to a year in wood buildings that were as hot or cold as the weather outside. Summer temperatures reached the 90s and accelerated the chemical reactions that create flavor.

American pork, traditionally free-range, has historically been cheap and low-quality. Peanuts, in particular, will ruin a hog's fat. In the past (and present), American pork, produced in the manner described in the New York Times, was of low quality. The Irish imported cheap American bacon and sold their higher-quality bacon to the British. Free-range, acorn-fed hogs were discriminated against, and even the subject of lawsuits.

The glory days the author is talking about weren't so great. If people want to make the best products, it will take more than letting pigs run around, or eat some acorns in addition to their typical corn/soy finishing diet.

A few, including Edwards & Sons, continued to age some hams for up to a year. When American chefs discovered them as a domestic alternative to European hams, the makers began to market their better hams as prosciutto. But they were making them from the same young industrial hogs.

This is one reason why I was so skeptical when I read, at the beginning of the article, "I recently tasted dry-cured hams from Virginia, Kentucky, Tennessee and Iowa, and some rival Europe’s best." You've got producers who make products that aren't very great, they give it the same name as foreign products that are better, and the media generally go along with it. A quality-seeking consumer is in a bind.

I encourage everyone to do some tasting experiments. Buy a few slices of cured products from various producers (European and American) and try them. In my experience, the American products often have soft pork and yellowish, rancid fat.

Also, the Spanish and Hungarians raise hogs "industrially" - and they produce some of the best-tasting products in the world.

If I was seeking out the best cured products made in America, I'd try those of The French Laundry and The Herbfarm - because they used European lard-type pigs, fattened like in Europe, raised to about 18 month of age.
Posted by Heath Putnam at 12:06 PM