An Email from The Savior of the Mangalitsa 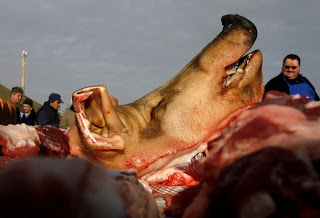 Peter Toth is the man responsible for saving the Mangalitsa breed from extinction.

In the chaotic period after the fall of the Berlin Wall, the Mangalitsa almost vanished. The socialist government had supported the breed for decades, but with the end of socialism, there wasn't any money. The natural thing for people to do was to kill the last few pigs and make kolbasz out of them.

Mr. Toth's firm, Olmos és Tóth Kft, bought all the stock they could and started producing for the Spanish market. It was natural that the Spanish processors would buy the Mangalitsa raw material, due to the Mangalitsa being very similar (but more fatty) than their own Iberico.

I sent him an email about Red Mountain Farm in California, and he reported that he's very happy with their success. The Mangalitsa is also doing very well in the other new market, Japan.
Posted by Heath Putnam at 3:25 AM