Mangalitsa Is Lardier and Tastier than Most Iberico 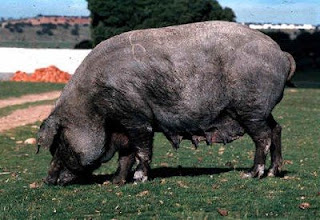 Lampiño: Best Tasting Iberico Variety, Lardiest Carcasses, Least Profligate
There's a nice article, "Iberian Pig Production: The Problems of Success", available online. You can get the full text here. This is very practical information for anyone wanting to finish Mangalitsa outdoors on mast. The "problems" the title alludes to are the apparent contradictions I've been exploring recently.

This article, among other things, explains the breeding programs and the various feeding programs - what, how much and when. Some may be surprised to find the emphasis on feeding things like antioxidants and metals like copper, to improve fat quality. That's completely in keeping with the Spanish achieving quality and containing costs with science. The use of farrowing crates (also mentioned) greatly reduces the cost of piglets, by ensuring that more of them avoid death by crushing.

I've heard the Mangalitsa described as better tasting than Iberico - by an expert who has eaten a lot of both. I was skeptical.

Having read the article, I learned there are different strains of Iberico, and some are leaner and more profligate than others. The Mangalitsa sounds a lot like the "Lampiño" (hairless) strain - super lardy, not very profligate and good at fattening on pasture. There's a picture of it at the top.

Here's a Spanish-language page on the different strains of Iberian Blacks, including the Lampiño (Spanish and English translation). That Lampiño looks like a Mangalitsa sow that's lost all her hair; the proportions look roughly the same. E.g. short back, small feet and short legs (the better to carry all the fat): 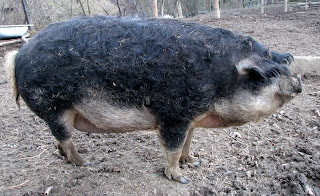 In the past, most Iberico I've seen have looked a bit longer. Those guys are so long, I you wonder how their back or legs can hold up. My back hurts when I look at them: 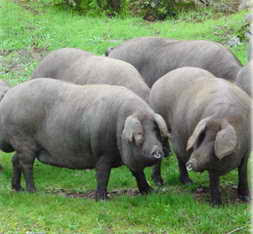 These Iberico look like they belong in a "Far Side" Cartoon
I've seen other comparisons of the Mangalitsa to the Iberian swine;

The Mangalica has the highest percentage of fat among pigs raised in Spain. This fat content makes its hams and loins mature very slowly into a ham with exceptionally rich aromas and flavor. Mangalica production is very limited...

One reason Mangalitsa production is so limited as that almost nobody is willing to pay for the fat, in the same way that there's not much purebred Wagyu production (relative to the Wagyu-cross production).

I love watching the hogs run, especially the really fat one.

Mr. Faul, one of the most innovative Mangalitsa breeders, proposed making mini salamis from his Mangalitsa. That's not a traditional "artisanal" product - but it would be easily produced and marketed, allowing him to make some money off his hogs.
Posted by Heath Putnam at 12:02 AM