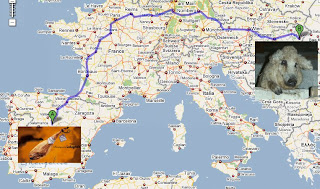 I recently posted about Mr. Toth saving the Mangalitsa.

I simplified things too much. Here's a more complete version.

After the fall of communism in Hungary, the Mangalitsa pigs were in danger of extinction. As unprofitable pigs, people couldn't afford to keep them. Mr. Toth was working in Spain for Mr. Moisés Olmos, the founder of Jamones Segovia.

The Mangalitsa is one of the few breeds of pig like the Iberico. Mr. Olmos, an Iberico processor, recognized this, and most importantly, was willing to invest money in Hungary in order to save the breed.

Their firm swept in and gathered up all the Mangalitsa they could and started raising them for the Spanish market. Mr. Toth's company handless the pig production, breed preservation, etc. Mr. Olmos's, the processing. Mr. Olmos is an amazing innovator: not only did he save the Mangalitsa, but his company is the first company to export USDA-inspected jamon iberico to the USA. He's been honored for this in Spain (Spanish or English translation). They are now even selling Mangalitsa products in Japan.


A few points:
Now that I've been in the Mangalitsa business for a while, it all makes sense:

Although most countries in Western Europe are closer to Hungary than Spain - and many of those countries have big (and in some cases, world-famous) cured meat sectors - but they lacked the expertise and quality-focus of the Spanish.

The Spanish firms produce the world's best cured pork products. At times, they use methods that seem at odds with the free-range finish of their best hogs - but if you know pork production, they make sense. The Spanish are the ones who produce the best stuff wholesale; they need the raw material.

Having studied this story and attempted to market Mangalitsa in America for a while, a few things are clear:

*The Spanish buying up the Hungarian production is an example of a "buy quality" policy (as opposed to "buy local") saving an entire breed of pig. If the Spanish had insisted on sourcing their pigs closer to home they'd not only have been stuck with inferior pork, but the Mangalitsa breed would have died out. Buying locally produced goods - particularly those that travel well - usually means missing out on the best. Sometimes buying locally means buying mediocre.
Posted by Heath Putnam at 11:46 PM