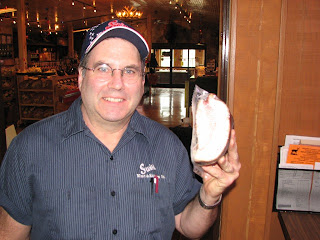 Mike Sloan with his jowl speck.

I've now got a big batch of Mangalitsa speck - jowl and belly. This is the first batch.

If you want to buy the Speck, it will be available in Swiss's online store soon. 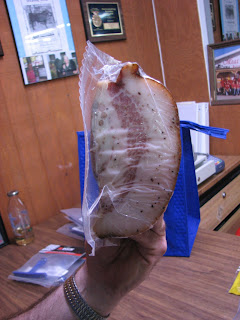 Closeup of the jowl speck.
Mike made it by dry curing, cold smoking and then drying the pork. Christoph Wiesner does a mixed cure, but given Mike's facility, doing a dry cure, the way he normally does his bacon, was easiest.

The bacon was made with juniper and pepper, like in Austria. Unlike in Austria, we didn't trim the glands out of jowls the way they do (reducing the raw material weight by approximately half), so the product looks a bit more like Italian stuff. 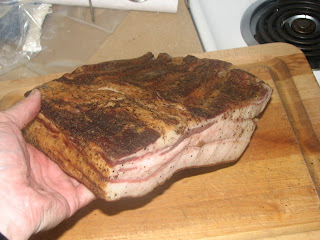 Photo of some belly speck.
Then there's the belly speck. It was made with the same process. It should be obvious why the belly is deribbed - otherwise it would have even less lean than it has.

It has taken a ridiculous amount of effort and time to get to the point of having lots and lots of speck and lardo. Here's a summary of the company's milestones - the ones we discuss with the public:

I can't believe how much work this has been. It has all happened in 3.5 years. I really feel I deserve some sort of prize for making all this happen in such short time.

Finally, I can eat speck in the USA* that isn't rancid, and has actual flavor.

Of course, almost all the milestones listed above required finding and collaborating with other like-minded people. Typically this was done via email or over the phone, not face-to-face. It is surprising this has worked so well.

I could have produced some one-off batches of speck, but I can't do that easily at home, and I never saw the point of doing a one-off batch. I want improvements that scale. Now I can take tens of pigs to Swiss Meats, have them killed and cut right, and turned into hundreds of pounds of these ridiculously addictive products.

The improvements Wooly Pigs has brought to Swiss Meat may benefit small farmers I don't even know. E.g. if I lived near Swiss and raised regular hogs (even just one or two), and wanted some good-tasting meat-type pork products, I could fatten my hogs on the right feed, take them to Swiss, and let them make the products.

One funny thing - although Swiss Meat's Mike Sloan made the speck, he didn't know how it typically gets eaten. I asked him to slice some up so we could try it. So he threw some on a slicer and cut off thick chunks, without removing the skin. He figured we'd then cook it up. I had to explain that the stuff is eaten raw, like prosciutto, and that to eat it, we needed to remove the outside skin, then slice the stuff as thinly as possible, and eat that.

I think it is a bit perverse that the guy making some of the best cured products in the USA doesn't know how to present and eat the stuff. I think we need to rectify that with a trip to Austria.

I remember the first time I ate such products. I was a bit grossed out by all the fat. But I quickly became addicted. I've seen the same pattern with the jowl bacon - an excellent product that I think is less addictive than the jowl speck - but still very addictive.

I've got a bunch of speck now. I feel a bit like the drug lord Tony Montana, from the movie Scarface. Rule #2 - don't get high on your own supply. So I'm not eating much of it. I'll mostly sample it.

It is great to have these products. People eat them and see immediately why Mangalitsa pigs are superior to meat-type pigs. Speck is an awesome product. It reminds me of the good times I had in Central Europe. I can close my eyes, eat the product, and imagine that I'm on Christoph Wiesner's farm, relaxing.

If Christoph were here, I know he'd say my Speck is quite good, and that Mike did a great job for his first try.

Pigs on the Wiesner's farm
Having the products ought to make it easier to sell raw material to meat processors. They eat the stuff and know immediately that unless they go with Heath Putnam Farms (better known as "Wooly Pigs"), they can't make products of comparable quality. 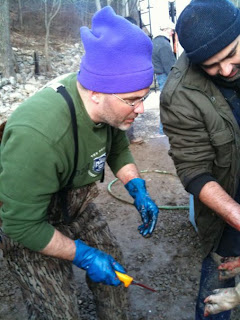 Rufus Brown and Christoph Wiesner get things done.
Having piles and piles of the product, and thinking back to when we didn't have any product makes it clear to me that Johnston County Hams' Rufus Brown had a lot of foresight.

Basically, last Fall, before we'd killed any reasonable number of pigs, Johnston County Hams tried some fresh meat samples (a few pounds of chops and leg steaks) and then offered to buy all our hams and picnics.**

In fact, had they asked for any of that, the deal might not have gotten done.

Instead, Rufus and the other Johnston County Hams staff ate a few pounds of fresh meat, did their research and decided they wanted to offer their customers Mangalitsa hams and shoulders. They then offered to buy our hams and shoulders, and the deal was done, after we met face-to-face.

I think it is interesting that the first company to lock in their Mangalitsa supplies was a medium-sized country ham maker. If they were much smaller (e.g. a small "artisanal" company), they'd likely be nervous about the risks of using such expensive raw materials to produce products that might or might not find a market. If they were bigger, they'd want to deal in quantities that we can't provide now.

Looking at the speck, I can't help but think of what it has taken to get here.

* I didn't do all this just so I could eat some speck. I did it because I figured that if I didn't pursue the Mangalitsa opportunity, I'd feel regret when I saw that someone else had pursued it and been successful. Or I'd be bothered because someone else would pursue it, but in a less quality-oriented way - so we'd have speck in America - perhaps even Mangalitsa speck - but it would have rancid fat. The worst part of that would be listening to people prattle on about how great it was, when I'd know the stuff was lousy.

** We later improved our cutting and we switched to much better hams and shoulders. The stuff we have is so much better now, I'm embarrassed that we did that first load that way. Back then, I really didn't know much about butchery. I'm not very good with a knife, but I know quite a bit about it now.
Posted by Heath Putnam at 10:35 PM