Awkward Experience and The Pig Next Door 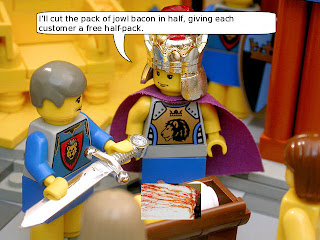 Modified image. Original at thebricktestament.com
A long-time very loyal customer showed up first thing at the farmers market today and bought the one and only pack of jowl bacon I had. She was very happy to get what she wanted, and she knew that had she not shown up early, she would have certainly not got it.

Immediately after, before I could do another transaction, some folks showed up. They wanted jowl bacon. One of them had come from New York. The two of them had come together to the market, their sole purpose: to buy some Wooly Pigs brand jowl bacon. Understandable, because Mangalitsa jowl bacon is incredible.

I assumed that since the loyal customer has eaten so much of it, she could do without this one time, and she'd like to see more people eating it, so she'd let it go.

She'd bought 4 packs of the stuff just a week or so prior - no big deal to give up the one pack, right?

My own strong desire was to please the guy that had traveled across 3 timezones to get the jowl bacon. I try to prioritize new customers; it is crucial to grow demand for our products in geographically distant places.

However, the loyal customer is a special customer, who really likes this product. For instance, a few weeks ago, she placed an order (which I can't fill yet), for 50 packages of the jowl bacon. She's bought a special freezer to hold this stuff.

It was dumb of me to assume that jowl bacon didn't really matter to my loyal customer. All signs are that she loves the stuff, to the point of addiction. Part of being a drug dealer is respecting the addictions of the customers, especially the best customers. I was not sensitive enough today.

As it happened, the loyal customer was having a special event later that day, and she wanted to introduce her guests to the product, as they had not had it before.

Worst case! Everybody had special needs.

The New Yorker was the pushiest of all four of us, pointing out that he'd come from New York to get the stuff. That was his position, and he stated it several times. He used it like a club, without remorse, to try to get what he wanted.

I felt overwhelmed with regret.

I proposed to give (free!) my loyal customer some "make up" bacon (belly and shoulder), if she'd let the New York people buy the jowl bacon. This was a desperate attempt on my part; its clear that she really likes what she likes. She doesn't want to substitute, even for free. There's a reason why she bought a freezer to hold a bunch of jowl bacon.

Even worse, by asking her to make such a switch, particularly on those terms (free), I put her in bind. If she said no, she appeared like a spoiler. Thinking of this experience, I regret it.

Thinking I was particularly Solomonic, I proposed to split the package of jowl bacon, then and there, with my pocket knife - and give (free!) each party half a pack. I figured I was being particularly nice; each party would get something, for free. Neither would get what they wanted, but they'd all get some of it.

I wasn't thinking of it biblically. I didn't want one of the customers to insist on the half pack, and for the other to give up and say, "ok, you take the whole pack," and then it would be clear who loved the jowl bacon the most, and I could then award the pack to that person.

I just wanted to resolve the stalemate by giving each customer half a free pack, and attempt to preserve goodwill from both.

No such luck: all parties rejected the proposed Solomonic compromise. Nobody wanted a free half-pack of jowl bacon. Back to square 1.

The topic of ordering the jowl bacon came up. I pointed out that Johnston County Hams has some really good Mangalitsa jowl bacon now. They aren't advertising it, but they've got it, and it is great. Everyone present took notes, but that didn't solve the problem of who was going to get the last pack.

In the end, the loyal customer graciously agreed to give up the pack. I wanted to give her some bacon (belly) and shoulder bacon to make up for it. She insisted on paying for it, so I sold it to her as cheaply as I felt I she'd let me get away with.

In retrospect, the entire experience was awful. If only I'd had two packs, it could have been avoided. If only the loyal customer had left before the others had shown up. If only I'd kept my mouth shut.

I regret putting one of my best customers in a bind. I'll make it up to her though, by giving her some ... wait… wait…. waiiiiit for it… jowl bacon.

Like those things, Mangalitsa jowl bacon (or guanciale) will get you high. It will also get you addicted. It is more like a drug than food.

Addicts act like addicts, regardless of what it is they are addicted to. Part of being an addict is having an intense feeling of loss when the stuff gets taken away. It really sucks when someone else gets exactly the stuff you want.

My own understanding of this phenomenon, and my shock at what a fiend I became after only a few days exposure to Mangalitsa cured products, is what convinced me that launching America's first Mangalitsa company was what I needed to do with my life.

Anyway, on the topic of jowl bacon, The Pig Next Door ought to be have shipped out or be about to ship out our Mangalitsa jowl bacon to their subscribers. They ordered 60 packs recently.

Also, Johnston County Hams might still have some really great jowl bacon (and bacon) made from our pork.
Posted by Heath Putnam at 9:53 PM

Could not agree more on the "addiction" jowl is premium candy in your mouth at any meal.

Hope all is well