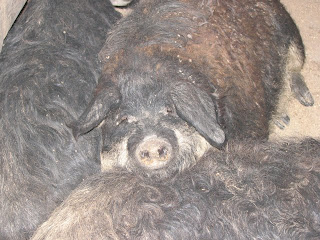 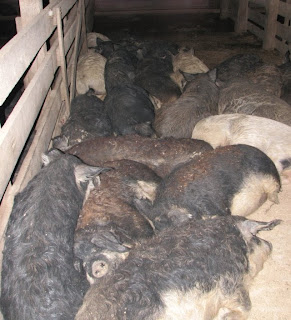 They settled down in the pen quickly and went to sleep.

I also visited two hog breeders that breed and fatten Mangalitsa pigs for Wooly Pigs. Below are photos from the first farm. 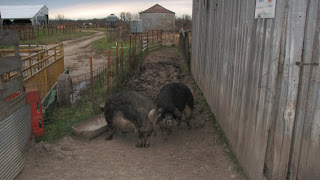 Breeder #1's farm looks primitive, but it is configured in such a way that the breeder can control and breed the pigs effectively. He can produce regular groups of pigs, tracking relevant information about the pigs - pedigrees, performance, etc.

The above photo shows some open sows. They were recently weaned, so they should be coming in heat. Every 12 hours, the breeder heat checks the sows. Mangalitsa sows don't stay in heat long or have a strong heat response, so he has to check every 12 hours.

The breeder hand mates; he controls the breeding. That allows him to run the farrowing more efficiently, because the sows farrow at the same time. It would be much easier to put a bunch of open sows in a pen with a boar and "let nature take its course" - but that method doesn't work well. It leads to lots of exceptions, which greatly increase labor and stress while reducing efficiency.

The breeder has worked on many different sorts of farms - big ones, small ones, indoor farms, outdoor farms, etc. Although his own farm is very small, it is run in a deliberate, organized way, allowing him to turn out large, regular groups of pigs, tracking the pedigrees of each pig, so that over time, he can improve the performance of his herd.

One reason breeders can earn a lot is that they can produce replacement boars and gilts for other farmers - because their animals will work better (in a particular system) than animals from a farm that hasn't selected for efficiency.

For example, would you rather buy a bred sow from these guys or pay a breeder a bit more for a bred gilt? Given the description of their sow, "the first litter she had 5 piglets", and given that a replacement gilt (from a Mangalitsa breeder) is expected to produce around 7 piglets, you are probably better off buying from a breeder. Even his second-class gilts can probably do better than 5 piglets per litter.

That explains why in previous times, pig breeders could make a decent living breeding pigs. 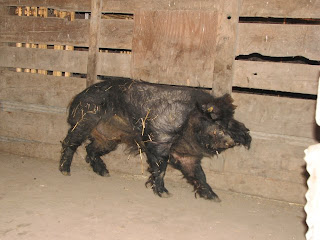 The photo shows a boar. He's got a skin condition, so he's lost some hair. He's essentially sow-breeding, semen-delivery system. He's happy when the farmer shows up, because it means he'll get to breed. 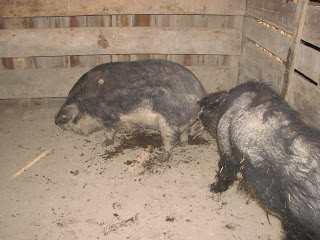 The boar got so excited, he leaked fluid all over the floor. Here he is, checking one of the open sows. She wasn't receptive, so they didn't breed.

The breeder spends a lot of time watching pigs have dysfunctional sexual relationships. He's (obviously) selecting them for working well in his system, so over time, things should get better, because he'll breed them to be the pigs that work in his system. Here's some sows eating their breakfast, after getting heat-checked. They get heat-checked (and potentially bred) before breakfast, because its easier to get their attention. 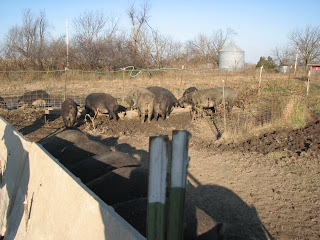 Here's gestating sows. They've all got IDs. The breeder knows when they need to get moved for farrowing. They get checked regularly to make sure they are still bred. If any abort, the breeder will notice and the process will repeat. Sows that repeatedly abort will probably get culled.

The breeder is constantly monitoring (and potentially culling) breeding stock, in an effort to improve the performance of the herd. All pigs are permanently identified. If a feeder pig dies or performs particularly sub-par, it is possible to trace it back to the sow and one or more sires. Problems in feeder pigs argue for the culling of its dam (mom) - because as long as there's a replacement gilt who is expected to do better than the dam, we ought to slaughter her.

Looking at the photos, you can't see that there's a lot of information gathering and processing going on - but a lot of workplaces are like that. If you looked at a trading floor, you'd just see a bunch of desks with screens and phones. If you look at a biology lab, you'll see lab equipment - you can't easily see the information gathering and processing going on.