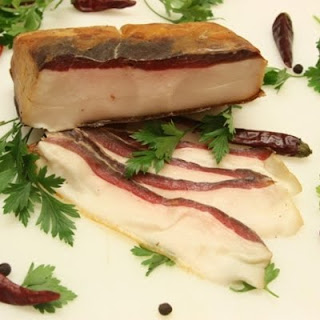 The Hungarian products will taste more familiar to Poles than the Mangalitsa products made in Spain. Besides using similar spices and herbs, the Hungarians and Poles both tend to smoke things, while the Spanish don't. That's due to climate - in colder & damper areas, smoking helps to reduce the growth of mold, and it speeds up the drying process. 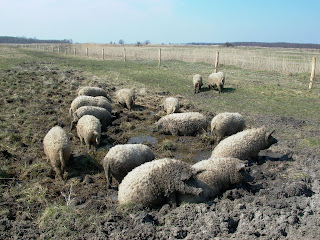 The products are made from pork of Mangalitsa pigs from Hortobagy, a park in Hungary. 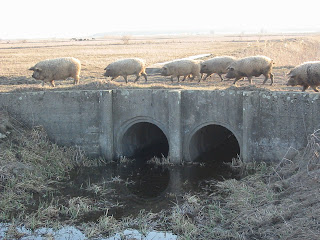 I found these pictures of the Hortobagy pigs here. It seems they are transforming Hortobagy into the swamp that it once was. They've introduced Mangalitsa pigs too.

Traditionally, Mangalitsa pigs were either raised on "factory farms", whose defining characteristic was that people brought to corn to the pigs, or in free-range systems like Hortobagy, where the pigs had to find their own food.

Those systems are both optimal. One produces regular bunches of pigs on a schedule, while the other produces pigs with as little investment as possible.
Posted by Heath Putnam at 2:52 AM