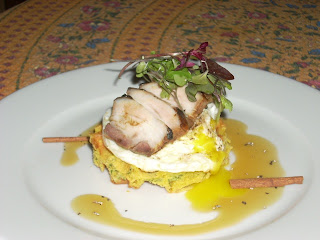 He's come up with his own savory waffle recipe, which he's released to the world.

If I stay in this business long enough, I'll have a Mangalitsa themed restaurant. I'm going to have Mangalitsa Chef open it. He spent six weeks living with and cooking for the entire Wiesner family. In return, he got to learn how to raise, kill, cut and process Mangalitsa pigs. He's dedicated to Mangalitsa pork. He's looking for work, by the way. If you need an executive chef, please consider Bryce Lamb, reachable at 206-313-9881.

Mistake! He couldn't just eat and enjoy the waffle. He chewed every bite very slowly, and I could see that all the time, he was thinking about the dish, and how he'd do it. In contrast, I ate all mine (very quickly), and then ate some waffles that another of us couldn't put away.

I asked Mangalitsa Chef to work on the recipe, so that I could put it out there, get it photographed, etc. Below is the waffle recipe. The braised belly and the syrup recipe is here. 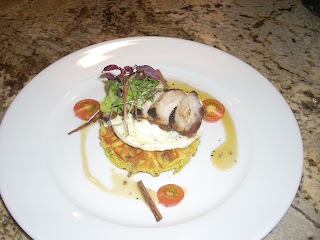 Note the egg, waffle (filled with belly) and belly atop the waffle.
Carrot Ginger Waffles

dissolve sugar and yeast in juice.

add flour in three stages and stir to incorporate

cover with plastic wrap and place in warm area for thirty minutes.

place 1/2 cup portion on waffle iron and griddle for three minute till done.