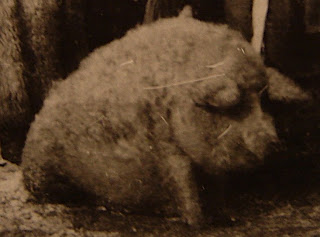 There's an article about a bookstore specializing in old cookbooks.

Reading the article, it struck me that chefs who use old books and recipes, in an attempt to replicate food of the past have set themselves a difficult task, because so many crucial ingredients have changed.

For instance, the article mentions a handbook from 1917 called "Bacon and Hams." If that book calls for a "butcher hog" in order to make bacon, you'd want a pig like the one at the top of this post (a very fat Mangalitsa). In 1917, the American hog of choice would have been a Poland China, which was at that time the lardiest American breed.

The problem is that butcher hogs aren't readily available anymore. Instead most pigs look something like this modern day Poland China: 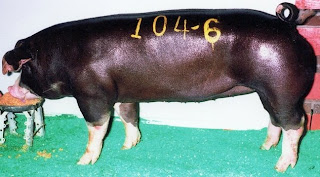 Due to its genetics, that pig can't provide the requisite raw material for traditional products. Hence even if one uses an old cookbook on a modern pig, one will only produce a modern version of a traditional food.

As Christoph Wiesner explained to me: he makes traditional products better than his ancestors could partly because he's got a vacuum packing machine. When his stuff is optimally ripe, he vacuum packs it, preventing it from drying out. In the past, when people ate summer sausage (in the summer), it was often dried out. So Christoph has traditional techniques and modern technology all working toward the goal of producing stuff that tastes the best.

It is my understanding that some of the most enthusiastic Mangalitsa adopters - e.g. the French Laundry's Devin Knell and the Herbfarm's Keith Luce - take this approach. They aren't using Mangalitsa because of tradition. They are using it because they think it makes better products than other options - some of which would arguably be more traditional (in the sense of seniority, not carcass composition) than the recently imported Mangalitsa.
Posted by Heath Putnam at 6:41 PM