Pigs in the City Part II 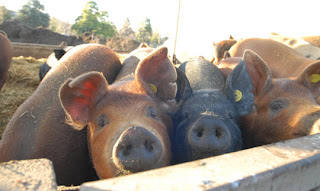 Urban hogs (Tokyo-X breed) dig Setagaya
I wrote about keeping pigs in the city (temporarily) a while back.

Tonight I found something amazing: in Tokyo, there are people producing pigs for restaurants. They aren't research labs keeping pigs; it is an actual working farm. Additionally, they are being raised in one of Tokyo's richest neighborhoods. You can read more here.

In most places, it is illegal to keep pigs and other livestock in a city, so Tokyo is surprisingly tolerant. I can't imagine they slaughter them in the city too - that would be messy.

In the USA, I think it will start with individuals who decide to do it their way, secretly. That's what happened with the Greywater Guerrillas. There was a neat New York Times article about these people who process their own wasterwater, illegally. It started in the Bay Area, part of America filled with innovators.

If anyone knows about underground urban pig farmers who produce meat, please let me know. The people who illegally keep pet pigs don't count - I'm looking for people who have decided to move on from urban gardening to urban livestock.
Posted by Heath Putnam at 10:27 PM

There are people who raise chickens in urban areas. But I think it would be difficult to get away with raising pigs and cows, unless you lived in a very blighted area where they just don't give a fuck.

OTOH, you could go smaller without anybody noticing, if you were inclined to eat non-traditional meat.

In my town in Colorado, the city council is probably going to pass a law making it legal to keep chickens in town, with some limitations. Not the same thing, quite, but heading in that direction perhaps?

Congratulations on the mention of your website on the 11th hour.

The episode was "eternal", aired tonight.

Bruce King - Thanks. I can't wait to see it.

I can't believe how much free publicity Wooly Pigs has gotten. It has been ridiculous: Saveur, Gourmet and Eleventh Hour, all at once.