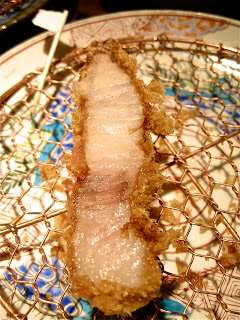 When I learned that Iberico producers were exporting lots of frozen Iberico to Japan, and that the Western Hemisphere wasn't producing anything comparable, I resolved that I would import Mangalitsa stock and start producing Mangalitsa pork in the USA. The reasons:
So I'm happy to see Mangalitsa pork gaining traction in Japan. It will be interesting to see if people prefer it to Iberico.

It would be so neat if Johnston County Hams or Knight Salumi winds up exporting products (made from our pork) to Japan.
Posted by Heath Putnam at 5:20 PM

Hello Heath. Thank you for your comment on my blog. I did some searches on Google Japan and found lots of hits on Mangalitsa. Many restaurants are serving it, and many bloggers are talking about it.
http://blog.livedoor.jp/k1500/archives/51701889.html
Photos # 4, 5 and 6 are of Mangalitsa.

http://blogs.yahoo.co.jp/ikeyan_cooking/31668961.html
This blog features a shoulder cut of Mangalitsa that the blogger cooked at home.