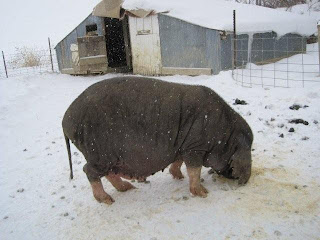 Meishan sow owned by Wooly Pigs
I've written previously about the Meishan breed of pig. It is a Chinese breed that has some traits in common with the Mangalitsa - it is a hardy lard-type pig that, in years past, played a key role in keeping humans alive. To quote Harris on the pig:

The Chinese have kept pigs for approximatley 5000 years, in subsistence conditions. Their traditional pig breeds are noticeably more selected than European breeds, because they've been selected so much longer. Basically, the Chinese stopped whipping their half-wild pigs a long time ago.

Compared to wild boar, the Meishan is good-tempered, incredibly lazy and hyper-prolific. It is the opposite of wild boar, in the same way that a Pug is the opposite of a wild dog. Meishan can be kept in the flimsiest of pens, because they have such little interest in exploring. They sleep, eat, gestate and fatten.

Unlike all other boars I know of, Meishan boars don't get fat. The boars love to "work", but they don't love eating. Perhaps someone, someday, will study Meishan boars and learn something about human obesity.

Meishan pigs don't like to move. E.g. you bring them food and they don't necessarily get up to eat. In that way, they are the un-pigs. If one reflects for a moment on the needs of Chinese subsistence farmers, it makes sense that the Meishan is the pig that it is; it is a pig best-suited for a Malthusian world. Because of its marvelous traits, the Meishan played a key role improving Europe's pig breeds, as noted by Harris and Charles Darwin. Europe was switching from extensively raised pigs to pen-raised pigs. Chinese had raised pigs in pens longer, so crossing their breeds with Chinese breeds allowed them to benefit from thousands of years of Chinese breeding.

The Swabian Hall, derived from the Meishan and European breeds like the Mangalitsa precursors - contends with Mangalitsa in taste tests. It doesn't look as striking as a Mangalitsa - but it apparently tastes about as good. Over time, the improved breeds were able to edge out the Mangalitsa. The Meishan genes were superior. Even now, Meishan genes give sows an edge.

If you ask USA farmers what they think of the Meishan pigs, they'll probably tell you they are worthless: small and too fat, and in addition, horribly ugly. 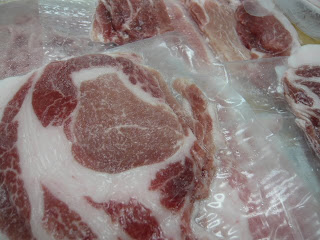 Meishan pork
When I did my research and saw that they were small and too fat, and hyper-profligate - and most important - famous for having fantastic meat, I knew I wanted to get some - because obviously they might help Wooly Pigs to do a better job producing the best pork.[1]

Basically, if the Swabian-Hall tastes as good as a Mangalitsa, a Meishan might work in our breeding program.

Many years ago, three labs imported Meishan pigs. As late as last year, at least two (Iowa State and USDA) were breeding them. I found out that one wouldn't sell to the public, while the other was going to shut down the breeding. That meant that the breed would go extinct in the USA.

I decided I'd try to find people who wanted to raise them, to try to keep the genetics available in the USA for future use. For more than a year, whenever people asked about buying Mangalitsa stock, I pointed out that they could get excellent lard-type genetics cheaply, if they acted soon.

Indeed, if someone wanted to copy the business model of Wooly Pigs - that is, acquire lard-type pigs, set up a production and processing network and market the pigs and pork - you could start with the Meishan pigs, without having to import a herd from overseas, avoiding an expensive, risky and time-consuming step.

In an effort to come up with a catchy name, ala "Wooly Pigs", one could name the company "Wu-Tang Pigs" (despite the fact that the Meishans come from Sichuan province, and not nearby Hubei province, home of the Wu Tang mountains). 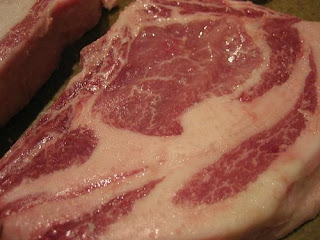 Mangalitsa chop - photo by Foodista.
Due to my efforts, three farms (one associated with Wooly Pigs) are now keeping some Meishan pigs. Unfortunately, there's no organized breeding effort to preserve the Meishan breed, and none of us have a big stake in the continuing survival of it as a breed. None of us are about to found a "Wu-Tang Pigs" and go all out[2] - despite the fact that the Chinese and the Germans have programs (including products) based on their lard-type breeds that one could copy. 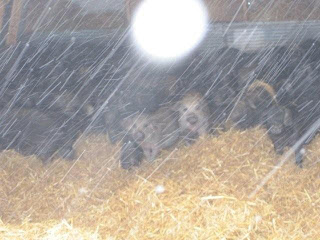 Mangalitsa x Meishan piglets
The herdsman who runs Wooly Pigs's Meishans is delighted with them, because they are so easy to work, and hopes we succeed with them. They are a lot more tame than Mangalitsas.

We have produced some F1 Mangalitsa x Meishan pigs. Some are for sale!

Due to heterosis, they are healthier and will grow faster than purebred Mangalitsa and purebred Meishan pigs. They ought to be the most affordable and economically-gaining 100% lard-type pigs in the USA.

They are very robust and should produce excellent meat. They should do better in hotter weather than Mangalitsa pigs. Having eaten Meishan x Berkshire pork - which was much better than Berkshire pork, I know the Mangalitsa x Meishan pigs will taste excellent.


[1] Among other things, the Meishan chops above look like they've got more marbling than my Mangalitsa chops (also shown) - although many variables besides genetics (feed & age) could explain why they Meishan chops look more marbled.

[2] On most farms, the Meishans are being used, as they have been for the last hundreds of years, to improve existing herds or create new breeds. Barring something like what Olmos es Toth did for Mangalitsa, the Meishan breed probably won't survive in the USA, just as it didn't survive independently in England. It appears these are Japan's Meishan guys, and based on this, I'd guess they might market some F1 crosses.
Posted by Heath Putnam at 5:57 PM

I am a Tamworth guy, but I am Chinese. So I would love to get some Meishan with an eye for awesome pork and preserving the breed. Please let me know how I can acquire some breeding stock.

I will have some in the future.

We have Meishan cross pigs. I can get all the Meishan semen I need. However, the pure gilts are more difficult to find.

The Meishan may be a diamond in the rough...lots of potential and undervalued. But if it's marketed correctly, used to increase heterosis of other breeds, it could prove profitable.