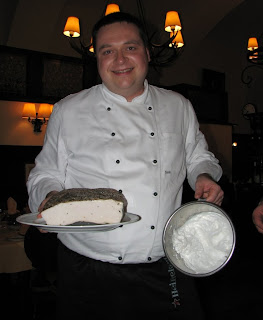 For whatever reason, that essay got copied all over the web. If you use Google's search engine to search for "slobbering over whipped Mangalitsa lard", you'll find many results.

Here's some quotes from the original essay:

You’ll find plenty of foodies slobbering over whipped Mangalitsa lard... What you’ll find little of — and perhaps this is going to start a fight, or get me flamed, but so be it — is a critical line of thinking that asks a simple question: Can foodies, can localists, can smallists feed our foodsheds? What does whipped Mangalitsa lard have to do with feeding people?...

You certainly will find plenty of foodies slobbering over whipped Mangalitsa lard. A little more than 2 years ago, in this radio interview (13:40), I explained that if whipped lard became a trend, it would be because of the Mangalitsa pig.

Whipped lard is something of a trend at high-end restaurants. It is pretty much a sure bet that if someone does a Mangalitsa pig dinner, there'll be whipped lard. The stuff is plentiful and tastes incredible.

Due to my actions, people eat whipped Mangalitsa lard, and they slobber over it.

As a broadist, I know what is important to me, and since I am a reformed localist and smallist, I have a sense of what is important to them. However, I am not sure about the foodies. Sometimes I think all that really matters to them is sensuous pleasure, gastronomic hedonism, couched in the language of localism. But, no matter, it is not hard to imagine that many, even most, foodies care about more than just their palates.

I would refine this a bit. Foodies care about taste and price. That's pretty much all they care about, regardless of what they tell you.

E.g. a foodie will eat Mangalitsa products and say, "wow that was incredible. And so the pigs are all raised organically, with a personal belly scratcher and they all die happily, RIGHT?" -- all said with a hopeful look. At that moment, he just wants you to say, "yes," so he can indulge himself without guilt.

A typical hardcore organic customer will eat the sample, say, "wow that was incredible. Is it organic?" Then when you tell them no, he'll get uncomfortable, because he's just eaten something really amazing that isn't organic. He'll have a difficult choice to make at that point: he'll either choose to eat organic food that doesn't taste as good, or he'll choose to eat food that tastes the best but isn't organic.

Anyway, if you read the rest of the essay, it is clear that the guy doesn't have a problem with whipped Mangalitsa lard. He's got a problem with foodies.

That's fine with me.

When I read the essay, I was just happy that whipped Mangalitsa lard got some buzz. It means I've succeeded. Also, the way foodies are, they'll read about it, then do their research, and then decide that they want to buy some Mangalitsa.
Posted by Heath Putnam at 12:42 AM

THE LARD LOOKS SERIOUSLY GOOD. i CAN'T WAIT TO TRY SOME!