Our Mangalitsa Pork on "Next Iron Chef" 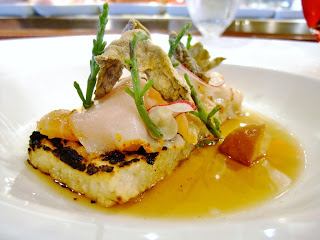 Photo by Tasty Bits of Houston's
Kata Robata's fish dish.
I don't have cable, but I found a synopsis of the show here.

First, I should say, I'm happy Heath Putnam Farms has finally reached the "Iron Chef" milestone. I'm happy to see our product getting positioned next to Wagyu beef.

When I read the synopsis, I saw this:

Tsai: Mangalitsa Pork
Hopes were high for Chef Ming Tsai, as they have been all season, but was his style too 80’s-ish? His mangalitsa pork and pork shumai in hot and sour soup was sensational. But his slow poached lardo with grilled cepes brought out mixed reviews. Donatella even called it off-putting. His last, grilled mangalitsa pork loin with bordelaise sauce, was satisfying. Symon called his dishes the most focused they’ve been all season.

That surprised me. Mangalitsa lardo is the best! How could he lose?

A few seconds of reflection led me to: you can't make lardo in an afternoon. It takes a few weeks just to make "salo" (Ukrainian plain lardo). Lardo has a lower water activity than fatback, and it melts better on the tongue than fatback.

Based on what I know now, Tsai's dish would be better described as a fatback crepe. It wouldn't be terrible, but a lot of people wouldn't love it, the way they might the pictured fish dish from Houston's Kata Robata (which has Mangalitsa lardo), because the fat could be a little unyielding.

A customer wrote me to say that Tsai deserved credit for using the fat so boldly. I can see that; he recognized that Mangalitsa fat is wonderful and tried to use it. Too bad he didn't have enough time to make real lardo.

Enough of that - time to celebrate our achievements. It is great that lots of people now know that Mangalitsa pork is fantastic - because they saw it on TV.

Anyway, I remember selling these guys the meat they used in the show, at the end of June. I got a call from a chef in Las Vegas. They needed a bunch of loins for a Food Network show featuring the most expensive meat. We sent them direct from Swiss Meat and Sausage Company, our processor. It was a big rush to get the stuff out, because we had little time to make the Fedex deadlines, and we had a bunch of other stuff going on. The chef said it was for a TV show, but wouldn't say anything more, except that they needed our meat for a show featuring the best ingredients.

Now we know what it was.
Posted by Heath Putnam at 9:33 PM