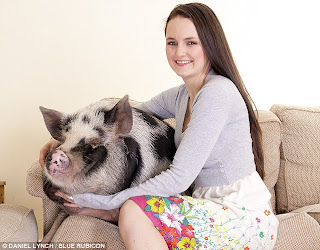 I had some people email me about breeding stock recently. They want to breed "micro" Mangalitsa pigs. Micro pigs are "teacup" pigs - as small as can be (e.g. 30#). The breeders are after the curly bristles and stripes of the Mangalitsa breeds, likely because the buyers of such pigs care a lot about looks.

I think that's bad for the Mangalitsa as a meat animal. The last thing we want is people getting upset about the that we kill and eat Mangalitsa pigs - in wholesale fashion.

This article is about people who buy what they think will be small pigs, but then they grow up into medium-sized destructive pigs. Because the people are attached to them as pets, they don't just slaughter and eat them. Rather, they keep them around, spending more and more money to try to contain them and mitigate the damage they cause.

The behavior of these pig owners would be unfathomable to our ancestors, who couldn't afford to have pigs destroying their few worldly possessions. It explains why the Meishan, derived from pigs that people domesticated thousands of years ago, is so lazy and tame (Chinese breeders killed off the unruly ones).

I tend to think the way our ancestors did: if there's pig that doesn't fit the system, you want that pig off the farm ASAP, even if it means killing it prematurely. If you keep that pig around, it will cause a lot of trouble.

When I see how big that pig on the sofa is (see photo at top), I'm surprised the sofa looks so good. If the pig was destructive like a Mangalitsa, it would have already ripped holes in the side of the sofa and pulled out all the stuffing. It would have also pulled the cushions off the sofa and had fun ripping them to shreds. I'm guessing they don't allow that pig near that sofa very often, or its a new sofa that they just bought, to replace the old one the pig ripped up.

My other thought when I see that pig is "wow, that's a FAT pig!" It is fat like a Mangalitsa.
Posted by Heath Putnam at 11:47 PM