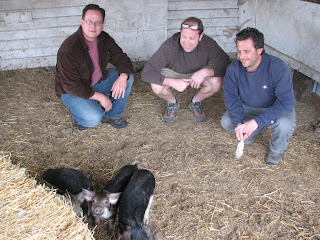 Dusted Valley and Cayuse just got some Mangalitsa piglets. Andrae (Dusted Valley's chef and a winemaker) contacted me about getting some pigs. He got Christophe Baron on board too. Corey, pictured above, is an owner of Dusted Valley, originally from Wisconsin.

As reported here, Dusted Valley will open a tasting room in Woodinville soon - not far from the Herbfarm's pigs. They are also building a tasting room at their Walla Walla location. 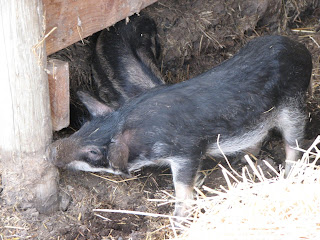 The piglets found a hideout under a ramp.
Christophe Baron, of Cayuse Vineyards, is from France. His wines are renowned for their quality. He's well-known in wine circles. He's got his own cows and now some Mangalitsa pigs. He says he plans to kill his pigs in late 2010 at the earliest. His father was a charcutier - clearly they'll do right by the pigs.