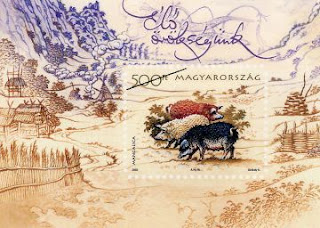 As I've explained before, Wooly Pigs and other Mangalitsa producers are on their way to establishing Mangalitsa as the super-premium hog breed in America. It will be interesting to see if that benefits Hungarians, whether through increased exports of Mangalitsa products, the creation of Mangalitsa-focused tourism, etc.

The establishment of the Mangalitsa in the New World helps to preserve the breed. Even if problems like classical swine fever lead to the depopulation of herds of Mangalitsa as in parts of Germany (automatic translation), the breed can live on.
Posted by Heath Putnam at 11:33 PM