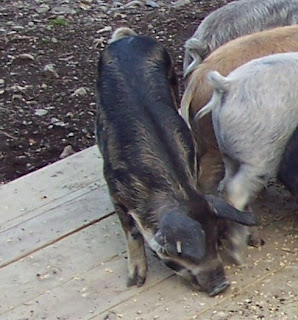 My favorite of the small pigs.
Wooly Pigs is the only company in the USA that produces Mangalitsa feeder pigs. The pigs went from Wooly Pigs's nucleus farm in the Midwest to New Jersey, driven by Steve, another of our Midwestern producers. 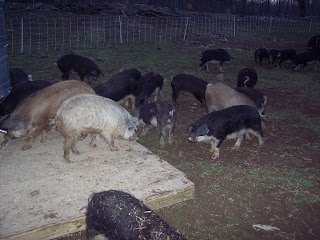 The brown, red and blonde pigs are
75% Mangalitsa (25% Berkshire) market animals.
The 75% Mangalitsa pigs (aka "Mangalitsa market pigs") display a variety of coat colors. The purebreds have the standard agouti pattern.

Living so far from the farm that produced these pigs, I didn't get to see them until today. They are some beautiful animals. I'm sure the Mosefund people are proud to own some of the best-looking and best-tasting pigs in the USA - in addition to the "rootinest" hogs. Those pretty pastures will be dirt lots before you can say jamon.

Of course, even though they are beautiful, friendly and relaxed creatures, they are strictly for eating. That's how we will preserve the breed in America - by eating them.

As these pictures show, pigs start out small and cute, but grow quickly and become less cute (and more tasty) looking. 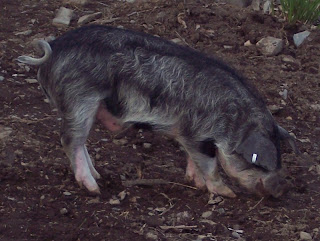 A cute piggy!
This is a good looking young barrow, but he's not very cute: 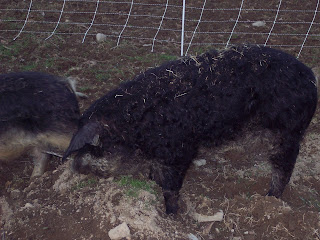 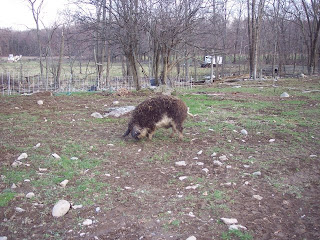 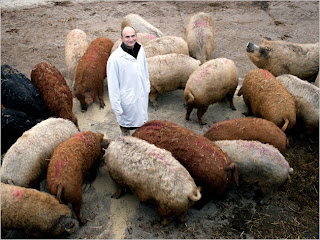 New York Times photo of Mr. Olmos, one of the saviors of the Mangalitsa.
If you live on the East Coast and want to visit some of the best tasting pigs, or perhaps eat them, Mosefund is your closest Mangalitsa producer. They are going to have an incredible Mangalitsa event in January - using some of the pictured pigs.

I'm incredibly happy to see the photos of Mosefund's beautiful pigs. For Wooly Pigs, it is a huge accomplishment to have such quality-focused people raising our pigs in one of America's major markets. As a company, this is our biggest and most important sale of Mangalitsa pigs, ever.

By the time Mosefund finishes marketing that (relatively small) batch of pigs, every foodie in New York City will have heard of, and perhaps eaten, Mangalitsa.
Posted by Heath Putnam at 9:26 PM