The Food Issue: Meet the Mangalitsas 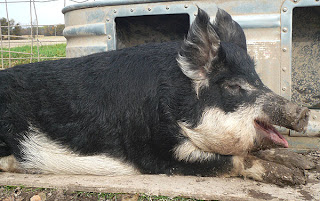 Photo by Mike Sula
Mike Sula, a journalist I've corresponded with for quite a while, has an article in Chicago Reader about Triple S Farms's (Stan Schutte's) Mangalitsa pigs. Last we saw the pigs, they were tiny: 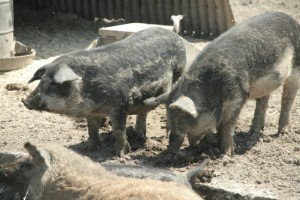 The cocky-looking pig shown at top is presumably one of the two striped piglets pictured above, 8 months later. From the article, here's where those pigs are going:

"The first thing I said was 'I want one,'" says Pat Sheerin [Signature Room]. He told his brother Mike [Blackbird], who put himself down for two. Schutte also got commitments from Chris Pandel of the Bristol and chef Michael Higgins from Maldaner's in Springfield. Virant went in on a pig with chefs from the Boka restaurant group, which is planning to host two back-to-back dinners in December at which Virant, Perennial's Poli, Boka's Giuseppe Tentori, and Stephanie Izard of the forthcoming Drunken Goat will each prepare a course with Mangalista pork. The other chefs are also planning special dinners that month, with the exception of Mike Sheerin, who'll be offering a Mangalitsa tasting menu throughout January at Blackbird.

As described in the article, Schutte's Mangalitsas are finished on a special diet:

He feeds them a mix of his own organic grains, particularly barley, and in August they got apples—but in the fall, when Schutte added acorns purchased from a nut grower in southern Illinois to their diet, they began to turn their snouts up at everything else.

Schutte's program for his six and our own much larger production remind me of Christoph Wiesner: most of his pigs get a low-PUFA diet similar to ours - because that's effective and affordable. The few special pigs (typically his own) are penned in the forest to eat acorns (and fed supplemental grain if necessary). I don't think Christoph sells any of his special pigs; there's never enough to spare. 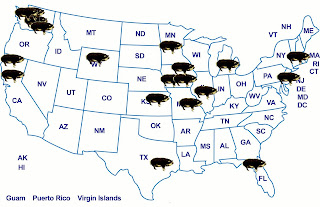 Our Feeder Pig Customers
Triple S Farms, along with nearly all of our feeder pig customers, have finished their pigs on partly or completely on acorns and forage, along the lines of Spanish Iberico bellota producers.*

The fact that so many of our customers strive to make the most of our pigs is in keeping with other extreme behaviors, like visiting Austria to learn how to kill and process Mangalitsas from experts, or staging classes in America (with Austrian experts) on that topic.

When I see that, it is clear that Mangalitsa producers are doing a lot more than just preserving the Mangalitsa breed - we are enriching America's culinary scene with a new sort of food, increasing awareness of topics like "fat quality" and popularizing relatively unknown (in America) but powerful techniques like seam butchery.

If a journalist was going to write something about the Mangalitsa phenomenon in America, I'd key in on those things - because those are the new trends.