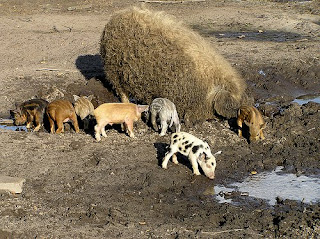 Flickr photo of pigs by Turukhtan.
I found some pictures on flickr showing some Mangalitsa pigs (and some non-Mangalitsa pigs, like that spotted piglet). One funny thing about that photo; there's a sow there, with dirt up to her ears as she roots.

The comment from the person who took the photograph is interesting:

Some of the piglets have shorter or almost no tails at all. Is it because of rough play or rough parenting?

Here's another photo of the same pigs: 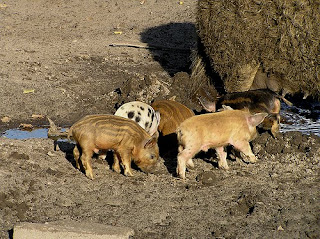 The short answer to the photographer's question is that pigs are cannibals. I've written before about tail-biting explaining:

Animal production involves making choices. Animal scientists argue that the tail-docking is better than the alternative - an outbreak of pig cannibalism:

'Docking tails soon after birth substantially reduces the incidence of tail biting. Pigs may cannibalize whether they are housed inside or on dirt lots and the practice occurs with widely different stocking densities. An outbreak of tail biting is expected to be very painful for the pigs with bitten tails. The small amount of discomfort caused by docking is much less overall than what would be experienced by pigs during an outbreak of tail biting.

Our inability to get pigs to do what we want them to do leads to animal scientists entitling their publications things like, "Tail biting in pigs: Understanding the intractable problem". 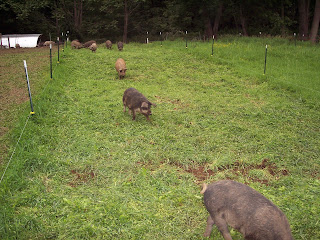 Pigs having fun destroying a pasture.
So not only do pigs root up stuff, but they eat pretty much everything, including each other. That's not saying pigs are bad; many omnivores with a more wholesome reputation, like chickens, dogs and bears, are cannibals too.

My general sense is that people who discover, for the first time, how animals are, are inclined to blame it on the humans if it disgusts them. E.g. if a chicken in a chicken barn eats another chicken, that's a chicken driven crazy by humans. That puts the producer in a no-win situation, because animals will pretty much always do something that can be blamed on the producer. If the producer makes a "least harm" choice like tail-docking, and people don't like it, then he's also to blame.
Posted by Heath Putnam at 8:49 PM