I just delivered some pigs to the Walla Walla area.

Chris Banek, senior viticulturalist at Seven Hills is keeping some pigs for him and Hannah MacDonald, the owner of Brasserie 4 in Walla Walla.

Chris is a really nice guy, considering that he manages Seven Hills Vineyard - rated one of the top ten vineyards in the world by Wines and Spirits Magazine. When I was delivering the pigs to him he casually mentioned that he farms about 1600 acres of grapes.

They got an interesting assortment of pigs - Hanna two purebreds, Chris a 3/4 Mangalitsa (3/4Mangalitsa 1/4 Berkshire) and an F1: 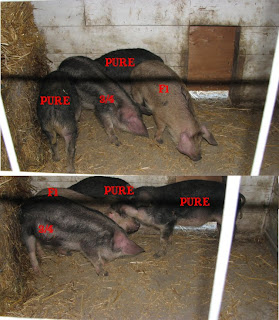 The 3/4 Mangalitsa pig is the interesting one. The F1 Mangalitsa x Berkshires have pink hooves, like Berkshire hogs. Breeding an F1 back to a Mangalitsa boar produces a 3/4 pig like the one above.

Although he looks like a Mangalitsa, he's got some black hooves and some pink ones, due to heterozygosity. The F1 in the picture above came from a crossbred dam (not a Berkshire) that happened to rendezvous (unintentionally) with a Mangalitsa boar. If its dam was a Berkshire, it would have pink hooves.

A lot of people fuss about the hooves and whether or not they are black. All things being equal, that F1 isn't going to taste as good as that 3/4 pig, despite having black hooves.
Posted by Heath Putnam at 9:29 AM