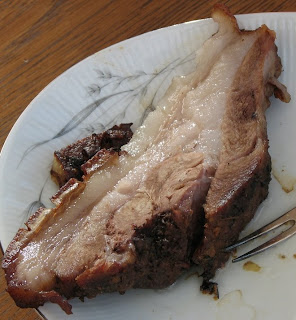 Food and Wine has a mention of Mangalitsa - in Berlin:

In addition to an intriguing wine-bar menu, with dishes like goulash made from necks of organic Mangalitza pigs with Bohemian dumplings, there were two seasonal tasting menus.

As Christoph Wiesner explained, the neck ("Schopf" in German) is a favorite cut in Austria and Germany, because of the various pork cuts, it is marbled, even in a common pig.

We don't have the "Schopf" cut in America, but if you check out his seam butchery class, you can see him turning a pig's shoulder into the neck and other cuts. As he explains at the beginning, you can make the neck cut long or short, depending on how much people want it.

This "Food & Wine" mention illustrates another interesting point about Mangalitsa - it is an international phenomenon. The breed is now raised from Romania to Germany, from Czech Republic to Italy. It is eaten all over Europe and Asia.

As of April, we'll be able to say that in the USA, Mangalitsa is raised from New Jersey to Washington, from Michigan to California.

One reason for the Mangalitsa's resurgence is that it does well in temperate climates, unlike the Iberian Black, which is practically hairless.
Posted by Heath Putnam at 4:24 PM