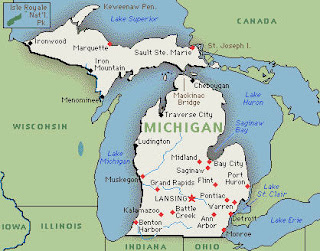 Mark Baker of Bakers Green Acres was on public radio talking, among other things, about the Mangalitsa they'll be finishing in Michigan.

In April, they'll receive a bunch of feeder pigs from one of Wooly Pigs' farms in the Midwest. They'll fatten and eventually market them. The slaughter date is about a year and a half out, so there's plenty of time to work out the details.

Their plan is to fatten them on acorns and produce the absolute best raw material - similar to what Red Mountain Farm did in California. As Mark mentions in the interview, much of their Mangalitsa will probably get sold outside of Michigan. There's only so many consumers in Michigan of such fancy stuff.

This remined me of an article I read on on the fundamental limits of producing an consuming food locally:

The local-food movement, too, must learn to bend. The reality of 21st-century America is that food demand is centered in cities, while most arable land is in rural areas. What open land remains around cities is so expensive that it either is out of reach for farmers or requires that farmers focus on high-end, high-margin products with little utility as mainstream foods. Thus, although there is great potential to increase urban agriculture (as we'll see in a minute), urbanites will always depend on rural areas for some of their food—especially given that by 2050, 70 percent of the world's population is expected to live in or near cities.

Conversely, rural areas with good farm potential will always be able to outproduce local or even regional demand, and will remain dependent on other markets. "One farmer in Oregon with a few hundred acres can grow more pears than the entire state of Oregon eats," says Scott Exo, executive director of the Portland-based Food Alliance and an expert in the business challenges of sustainability. "Attention to the geographical origins of food is great, but you have to understand its economic limits."

Right now, one farmer in Michigan with a small number of Mangalitsa can produce more than the state needs.
Posted by Heath Putnam at 4:42 PM