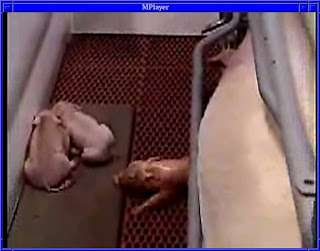 A piglet getting squished by his dam on a Canadian farm.
I was looking at pig videos on YouTube and I found these from Ohio Pork Tour. The videos are part of a campaign to improve the image of their intensive (indoor) swine production in Ohio.

I'd normally shy away from such an emotional issue, but the videos they have are so informative, and so hard to otherwise come by, that I though I might as well discuss them.

I'm strictly interested in how they reduce mortality. Issues like "corporate agriculture", the industrialization of animal production and so on are orthogonal to the issue of saving pig lives. The methods they use to save lives actually originated on small farms, and are regularly practiced on them (particularly in winter).

When this farmer explains in this video that when they ran pigs outdoors "they'd (sometimes) have them the next day out it in the dirt lot (in the gestation area), which is not good," he's saying that pigs used to die pointlessly, due to the difficulty of managing them in non-confinement. It is surprising he's so honest about this; a lot of people like to hide their failures. Nevertheless, it doesn't make it easier to look at his crated sows and feel good about things.

Wooly Pigs doesn't have much in common with the intensive farmers in Ohio Pork Tour, but all producers (intensive or extensive), want to produce as many piglets per sow per litter as possible. Indeed, in Spain, the new trend is to produce Iberico, a traditional lard-type hog like the Mangalitsa, indoors. As the Spanish demonstrate, modern production methods (however controversial) are compatible with producing high quality products.

This next video shows how the intensive producers go about weaning the most pigs possible. They put the sow in a crate, which restricts her mobility, making it a lot harder for her to crush and kill her piglets.

Crates look terribly unnatural (like hospitals, they are functional), yet at the very end of this video (the picture at the top is a capture from this), made on a Canadian farm, you can see a cute piglet trying to escape out from under his huge dam (aka "mom"). Without the crate, you'd have more dead piglets.

Farrowing crates (and intensive farrowing in general) save the lives of piglets, particularly in cold weather. Even if farrowing outdoors is done in such a way that piglet mortality is kept under control, it is still stressful and difficult for the humans, who have to work outdoors year-round, and under particular stress in winter, when pigs are most likely to die. It is important to consider the welfare of the human beings running the pigs too.
Posted by Heath Putnam at 7:21 PM

Corporate pig farming -- and again, there are many more pigs being raised these days on corporate farms than there are on family farms, in spite of the fact that more pig farms are family farms than corporate farms -- is destructive of rural communities and the environment, and it is a system in which the welfare of the pigs is reduced to a variable in an efficiency calculation, and the interests of the pigs are totally ignored, bracketed out completely.

To get a good sense of what corporate pig farming is really like, I recommend the following documentary, "And On This Farm," which appears on YouTube in three parts. The first two parts are about the community, and the first half of part III is about the pigs.

Note that this video is ten years old now, and since it was produced there has been an absolute explosion in the number of corporate pig farms.

By the way, I am very happy to trudge out into the wind and cold to take care of the pigs on my farm, where they have the opportunity to go out to root around in the barnyard or hang out and nap in a pig pile between feedings in their shelter, which is kept deeply bedded with hay and well protects them from the wind. On the cold, windy, cloudy days, they choose to nap, snuggled up next to other pigs in a warm nest, which is exactly where they instinctively want to be. On even the coldest days when the sun is shining and there is no wind, you'll see them out and about in the barnyard, rooting through the snow, or playing a game of tag, or wrestling.

I gladly take frozen fingers and wind-chilled cheeks over putting those pigs in a confinement barn. It is not stressful to me at all, although I would be lying if I said it isn't difficult.

What I do plan to do is put up an open airy hoop house in which I can practice the deep bedding winter raising system. The reason I have decided to do this is because while the barnyard is a pleasant place for the pigs in the depth of the winter, I don't like how mucky and muddy it gets in the spring. With the hoop house, I can leave the door open to a fenced yard when the ground is nice and hard and then close the door for the four weeks or so of mud season and let the pigs hang out in the hoop house in the deep bedding until it is time to put them out on rich growing pasture.

I tried to keep my first comment fairly short, so I didn't want to get into these other things, but I can't help but add two additional points.

The first is that in the US, 99% of all pork consumed comes from factory farms, and while many of those factory farmers are considered "family farmers" the reality is that about as high a percentage of them are contract "growers" in the integrated multinational system where the farmers "own" the land and the buildings -- and therefore all of the debt -- while the integrator owns the pigs, and often the feed, and pays the farmer a "wage" per pound of pork to raise the animals. Hog barns (like chicken barns) are single purpose barns that actually lower the value of the property as soon as they are built, so if the hog business doesn't work out for the "family farmer," who is very much like the indentured servant of old, he or she -- they -- is screwed, which is why so many of them just keep slogging away. Of course the system works for some, which is why it is perpetuated.

One reason that so many people have such disastrous experiences on extensive farms with sows that come from factory farms is that this maternal instinct is irrelevant on a factory farm. On a factory farm, this instinct is not selected for. Instead, they just lock all of the sows up in steel cages.

Another reason for high weaned pig rates on extensive farms is the use of "English Style" and A-frame farrowing huts that provide safe spaces for the pigs without needing to lock the sow up.

If you think extensive systems are so bad, you should look into the English system of large scale pasture farrowing. There are 400- to 800-sow farms in England, all farrowing on pasture. Recent trade regulations have endangered these farms, so they might not be around for long.

I would like to reiterate what I said in a comment a couple of months ago: with all of these positive comments about factory farming, I can't help but feel that you are "softening your audience" for the day when the first Wooly Pigs CAFO (no matter how small) opens up. Of course, that is your prerogative, but if that is in fact what you are doing, or planning to do, you should be more forthright with us.

How many pigs are you weaning per litter in winter, and how many in the other seasons?

Crates are orthogonal to the other issues you've brought up. They are separate from "corporate agriculture", the fate of rural communities, etc. I'm just focusing on the piglets and their mortality, and the use of crates to save their lives.

There is a moral argument in favor of crates, given that they save lives.

People who are against using farrowing crates for a few weeks need to explain why dead pigs are acceptable, when those deaths can be prevented.

Finally, what changes would one have to make to a typical barn to make it enough like a hoop house that you'd - from an animal welfare stance - be indifferent? What do you think it takes to make an airy curtain barn as nice as an airy hoop house?

Thanks for recommending me the videos. I hope you read Horwitz's book, which likewise discusses Premium Standard Farms and the "Hog Wars".

His weaning average is nine pigs per litter.

Brian Hayes -- You are claiming he's weaning 9 pigs per litter. Where does it say that? What I saw is this:

"The outdoor system performs as well as indoor farrowing, too. "My weaned-pig average for sows is about 8 to 8.5 farrowing inside or out."

As you wrote, "Plus he's showing that keeping hogs happy is actually easier than running confinement facilities."

I expect that in the future, we'll develop brain scanning devices that will allow farmers with confined pigs (either temporary or total confinement) to prove that their animals are happy. If customer demand happy pigs, they'll be able to produce provably happy pigs. At that point, they will be able to argue (as with the mortality issue) that confining pigs, so as to optimize their happiness, is a moral imperative.

In either case, even if the sows in a confinement are unhappy being in the farrowing crate, one can argue that there is a moral obligation to temporarily crate them, so as to avoid unnecessary crushing of piglets.