Some customers of Red Mountain Farm made a Mangalitsa dinner and wrote up their experience. Red Mountain Farm's Kylan Hoover forwarded me the review, which I've tried to translate into text and photos.

I'm very happy that Red Mountain Farm did such a great job with their Mangalitsa feeder pigs. This part of the report tells me that they did things correctly:

"In the picture, you can see that the fat is rather stiff. This was quite different from the fatback that we used in our first trial, which was not as brightly white and became floppy at room temperature."

As I've explained before - and as I learned from Christoph Wiesner - Mangalitsa producers must optimize the fat quality. The fact that Red Mountain Farm has hard, bright white fat tells me they did it right.

Whenever I read reports like this one, I'm happily surprised at how much people appreciate Mangalitsa!


A couple of months ago, Erin got a copy of Saveur magazine in the airport and happened upon an article about Mangalitsa pork. Obsession soon followed and after a month or so, we were able to order some shoulder, fatback, belly, and jowl from Kylan Hoover at Red Mountain Farms. Subsequently, we spent a lot of time testing out different recipes and techniques, many of which we had never tried before. This menu is the final result. The pig in all of its forms was an unforgettable experience. Thanks wooly pig!


Whipped lard was prepared 2 ways: one with truffles and the other with diced red onion and paprika. Pickles included homemade quince and beet pickles, takuan, and dill pickles. We also had some multigrain and French baguette from our excellent local bakery, Bread & Cie. 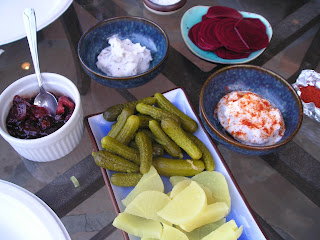 This terrine contained ground Mangalitsa shoulder, fatback, and belly, along with veal and a foie gras inlay. 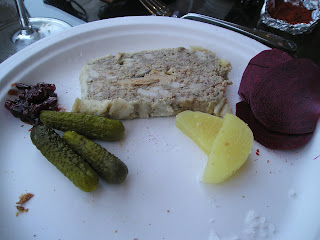 Erin: We weren’t sure what to expect with the whipped lard. We were happy to discover that it acted as a flavor amplifier, intensifying and extending flavors without having a specific flavor of its own. It also added a rich mouth feel and was surprisingly light. The quince pickle, which we made with vinegar, spices, and honey, surprised us with its complexity and its combination of tart and sweet acted as an excellent accompaniment to both the whipped lard dishes and the terrine.


Dave: Having sampled the terrine the morning before the dinner, I was very nervous about the traditional course order. I was pretty sure nothing could top it, each bite was like a chain of multiple flavor explosions in your mouth – it was stunning, it was transcendent, and I was sure it was all downhill from there. 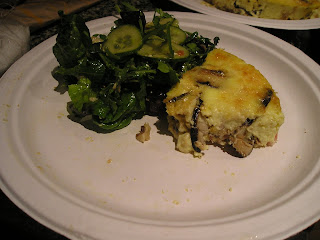 This savory custard didn’t contain any Mangalitsa, but it did have homemade Berkshire pancetta as well as shiitake mushrooms, caramelized onions, and Parmesan cheese.

Erin: We have this dish for dinner pretty often. It is basically quiche without the crust. We have tried a variety of different fillings, but the homemade pancetta is the best so far. Ideally, we would have liked to include guanciale instead of the pancetta, but we haven’t finished curing it yet. The reason we tried home curing in the first place was that we heard how amazing the Mangalitsa was cured. After experimenting with a couple recipes, we were hooked. If you’ve never tried making your own bacon, the flavor, especially for cooking, is far beyond what is usually accessible. It is also incredibly easy.


Dave: The salad is also a mainstay – I make it every day for Erin’s lunch. No two are the same, but this one had a base of arugula, mizune, and red leaf lettuce to which I added cucumber, tomato, shinko pear, red onion, walnuts, grapes, Kalamata olives and feta. It is a perpetual source of embarrassment to me that despite my Greek descent, I prefer French feta for its rich creaminess. The dressing was soy, verjuice, white balsamic vinegar and olive oil.


The pheasant was brined and then larded with Mangalitsa fatback using a larding needle. 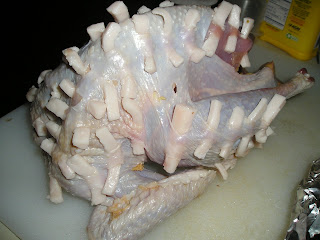 We made a sauce from the pan juices with port, chicken stock, thyme, and bitter orange zest. 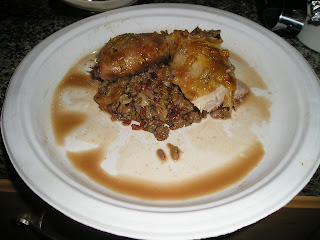 Erin: Larding apparently used to be pretty common for game, but was mostly replaced with wrapping in bacon, if used at all. The short pieces of fatback melt slowly as the bird cooks and bastes the meat, keeping it moist and flavorful. We tried this exact recipe with normal fatback first as a trial run and enjoyed it a lot. The Mangalitsa version, however, was far deeper and richer, really highlighting just how much of an effect this fat can have on a dish. In the picture, you can see that the fat is rather stiff. This was quite different from the fatback that we used in our first trial, which was not as brightly white and became floppy at room temperature.


Dave: One of my favorite things about cooking with Mangalitsa is all the left over fat. The terrine had basically overflowed with this golden yellow lard, intensely flavored with foie gras and some truffle – it was scrape the cutting board over and over for the last drop good. We clarified this, removing the meat bits and jelly, and pan seared the pheasant in it before putting it in the over (instead of the lousy old butter we had used on the first one). 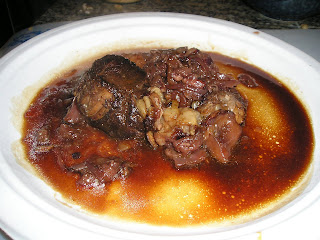 Erin: This dish is an adaptation of the pot-au-feu recipe in the French Laundry cookbook, but instead of serving it on a bed of vegetables, we served it on braised red cabbage with chestnuts instead. Since there was so much fat on the shoulder, there was a layer of fat that accumulated on the top of the braising liquid. Unfortunately, this seemed to keep the heat in and the meat cooked a bit quicker than we expected. In the future, we’ll check it after 3 hrs or so instead of the 4-5 and cook it at a lower heat than 275. Still, when it came time to eat it, the slightly tougher texture was hardly noticeable. The rich chunks of fat had absorbed all the flavors of the long braise. Each bite was paralyzingly intense. The cabbage had cooked for 5 hours in additional wine and some of the left over braising liquid. It had a lovely sweetness that cut through the richness of the pork.


Dave: all the wines Brian chose were excellent in and of themselves, and as matches, but I really loved this Priorat. We had used a similar Spanish wine for our marinade and braise, but this one was superior in every way. We had tried both red and white wines in our two trial runs for this dish – both were good but I am happy we went with the red -- we really needed something a bit fuller to stand up to the Mangalitsa. 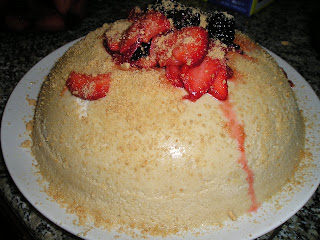 Erin: No Mangalitsa here, but an excellent light and airy dish.


Dave: Somehow, there’s always room for Bavarian cream! Our first almond one, and it was really a hit.

Recipes, information, and inspiration from:

The Way to Cook, Julia Child

On Food and Cooking, Harold McGee
Posted by Heath Putnam at 10:28 PM