The Herbfarm has some pigs that they'll be killing in about a year. Because they raise the pigs close to a city, free pig food is easy to come by. There's no point in buying feed when free food is available.

In their case, they've got free whole wheat bread from Trader Joe's. It is astounding how much free, high-quality food there is in America! It is so shocking to see those pigs eating that really good looking food. But humans don't want to bread once it is 3 days old, so it gets thrown away.

The understanding of Mangalitsa producers is that you can feed the pigs whatever keeps them healthy and gets them to gain until the last 2-4 months, when you've got to be very careful about what they eat - because that's what determines their fat composition and flavor.


It isn't typical that free food is the best finishing food - but Mangalitsa pigs take so long to mature, free food can make up a lot of their diet.

The big pig in the videos is about 19 months old. All he's done his whole life is eat. He'll be approximately 30 months old when he's slaughtered. The feed that really impacts what pork he'll produce he'll eat 8 months from now. He could be eating KFC and TV dinners until then - as long as he eats the right things in the last 4 months, he'll taste sublime.

This understanding confuses some people and bothers them - but it is because they aren't thinking about the issue of how to economically produce fantastic meat and fat.

I remember when Christoph Wiesner explained to me a great way to fatten pigs: let them run around for the first year to develop strong bones and muscles, and then put them in a pen and feed them a tremendous amount of low-PUFA grain. The bones and muscles will allow them to get immensely fat, allowing one to make a lot of Speck.

It bothered me to hear him say that, but when I thought about it, it made sense. If the pigs run off the calories, they won't get as fat as possible. That means they'll be a lot more expensive per pound. It is wasteful and there's no perceived benefit.

One scheme I've heard of - and it is great - is to use electric fence to build a movable pen, and move the pigs around an oak grove, so that they can consume acorns and fatten without running off too many calories. With that system, the pigs become a way of transforming things that we can't use directly - acorns - into something we really want. 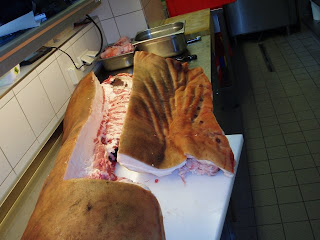 My understanding is that the The Herbfarm would like to see if they can get that big pig really big, like the best ones in Vienna. Making sure he can't run off the calories would help.

Another trick I've read about is to allow some hungry pigs to enter and eat after the "target pig" has already eaten. The sight and sound of the new pigs eating makes "target pig" eat even more. As with weight training, every little bit of food helps, because much of the food just goes to maintaining the animal, and only the excess calories get turned into new pork.
Posted by Heath Putnam at 11:52 AM