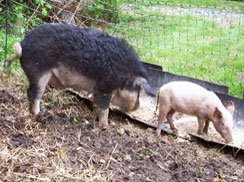 I'm going to a beer dinner this Thursday. Here's the info I got from The Willows Inn.

Greg Higgins from Higgins in Portland will pair his dishes with beer from Pike Brewery. The chef/owner of Higgins, often called "Piggins" because he pioneered the use of the whole pig in the restaurant world, Greg is a nationally known winner of the James Beard award, and Gourmet magazine's top 50 chefs in the country. He will highlight the amazing differences between Mangalitsa pork, recently featured in Saveur and Gourmet, and the normal pink pig. This is a gustatory event not to be missed.

Charles and Rose Ann Finkel, owners of Pike Brewing Company, are regarded as pioneers in American craft beer.
Beginning in 1978, they were the first to market beers from family owned breweries in England, Germany, and Belgium. They opened Pike in 1989 to offer world class beer brewed locally. Pike moved to its current location in 1996, adding The Pike Pub. That year, beer author Michael Jackson described Pike as “A shrine to beer.” In 1997, The World Beer Championship named it “One of the 10 best breweries in the world. The Finkels sold Pike in 1997 and reacquired it in 2006. Since then Pike beers have won numerous awards including Best Scotch Style Ale (Kilt Lifter), Best Stout (XXXXX Extra Stout), and Best Belgian Style Ale (Pike Monk’s Uncle Triple). In 2008, the Pike Pub was voted “best brew pub” and “best local attraction” by readers of N.W. Source. Citysearch named Pike “best organic restaurant.” In working together with Greg Higgins, they have come up with surprising and delicious pa irings to complement Nettles Farm ingredients.

Click the link below and email us with your reservation, or give us a call!