There's a video from Australian Pork that covers the main issues of the sow housing debate. It is the most evenhanded video I've seen on the topic of intensive housing of sows:

Sow stalls (aka "gestation crates") look awful, but the people who use them claim that they are the best alternative. The video includes some nasty fights between sows in group housing - showing one of the main problems that sow stalls solve.

This next video is really over the top. The animal scientists unqualified support of crates is off-putting:

He makes the claim that most pigs don't want to roam; in the wild, they roam because they have to, for food.

In general, he's probably right that most domesticated pigs don't care to be that active - because they've been selected for living in confinement. There are differences between breeds. Just as herding dogs are generally more active than companion dogs, some pig breeds are lazier than others.

Humans are responsible for these changes in animals. E.g. the Mangalitsa was formed from half-wild breeds of pigs that were quick to bite. The progenitors of the Mangalitsa were like feral pigs. Just as humans transformed wild dogs into fairly tame ones, humans have (over thousands of years) transformed wild pigs into extremely lazy, profligate and tame pigs.

In contrast wild boar are active and generally don't do well around people or in tight quarters. 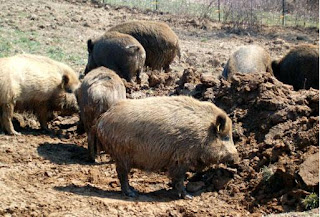 I recently talked with a guy who breeds wild boar. They had to cull a number of them to build a herd that could work in their system. They needed to raise them indoors in order to avoid catastrophic winter farrowing losses, but that meant making their farm work for wild animals, and culling the animals that were still "too wild" for the farm. After a few years, they've got a herd that works for their farm, which breaks out the life cycle into a typical multi-site system, allowing them to keep the pigs healthy easier.

Domesticated pigs stay put behind a flimsy fence.
It bothers some people that we've repeatedly taken independent, active animals like pigs and turned them into lazy, dependent animals that require expensive equipment. Some people think it is wrong for humans to produce animals that can't fend for themselves. Others (the folks who raise animals intensively) can argue that the people who raise pigs extensively are indifferent to the extra mortality associated with those systems.

I think most people who have opinions about how animals are raised would be shocked to hear that intensive farmers can logically argue that they are better animal stewards than traditional farmers.

Of course, it is only the amazing success of our ancestors domesticating plants and animals is what allows us the luxury of reflecting on these philosophical issues, instead of filling our time with constant hunting, gathering and whatever else people did in the Stone Age.

It isn't clear how we humans should decide what transformations of our animals are forbidden or not. E.g. Meishan pigs seem pretty nice and happy, as long as you don't make them move around much. I don't think it is wrong that humans have bred them that way. In general, it is good if we match the animals to our keeping systems, and vice versa.
Posted by Heath Putnam at 5:40 PM